Jim Kuemmerle and the Triangle Jazz Project: Our Work Is Never Done 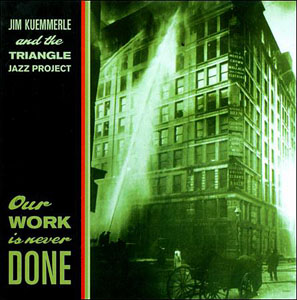 The glory of the world is magnified when the beauty of the human spirit is on full display. When our fellow man decides to look beyond the self to see us all as one collective we, then the real work of improving the human condition can begin.

As an elementary school student, Jim Kuemmerle's whole world changed when he learned the history of the tragic Triangle Shirtwaist Factory fire—a March 25, 1911 fire that claimed the lives of the Jewish and Italian immigrants who worked in the New York City sweatshop. Since then, the pianist/composer has dedicated himself to both honoring the memory of those who perished that day and educating the masses about how much still needs to be done to improve working conditions for those who've suffered similar fates around the world. Kuemmerle's dedication has ultimately resulted in Our Work is Never Done, a ten-track, Old World-meets-jazz chronicling of the people, places and things that represent the parts of this tragic fire's whole.

Recorded with the appropriately named Triangle Jazz Project, Kuemmerle's music has been written and arranged with the finesse of a seasoned pro. Each song paints a visual that adds an exciting element; at points it also sounds like a Broadway musical—not due to theatrics, but because of the illustrations' precision. The music tells the story of Italian and Jewish immigrants, the music playing as much a part of the storytelling as Kuemmerle's inclusion of American jazz. It's a very well-organized and conceptualized recording.

"Washington Square" has a vibrant, folksy, yet majestic vibe that conjures images of life there, the notes dancing and cultures mingling proudly, as jazz and old world folk elements make the song. At points cohesive, the aptly titled "Dividing Lines" offers an anchoring rhythm section, with two soloists who purposefully don't support each other or their accompanists. A very interesting approach to writing, it also offers a straightforward interpretation of the division that likely existed between the Factory's employers and employees.

According to Kuemmerle's liner notes, the Triangle Shirtwaist Factory fire may have been caused by "a cigarette butt falling into fabric scraps," and "Inferno," like the other songs on the recording, offers a very real imagining of what that may have been like. The song starts with one instrument playing faintly and then it crescendos, smolders even, as layers of instrumentation and sounds provided by members of the Zivio Ethnic Arts Ensemble are added for effect, building in scope and energy before coming to a dramatic end. The care that was taken to replicate flame to full blown fire to the chilling finality of a fire's end comes through with just the right punch. "Inferno" is the song that best captures how much the telling of this story means to Kuemmerle. There's no way to escape the magnitude of the tragedy after hearing the song's heaviness.

Kuemmerle may think that our work is never done, but the blessing is that he cares enough to spark a different kind of flame—one inspiring consciousness and social responsibility. We are the change we seek.

About Jim Kuemmerle and the Triangle Jazz Project