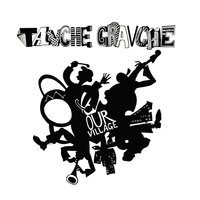 Put Our Village in the player. As the music comes pouring out, you close your eyes and try to envision where you are being transported. This is folk music, and the musical modes imply the Balkans, or somewhere around the Black Sea, as do the odd-beat meters, but there is also a klezmer element mixed with other Middle East sounds, and finally, a sense of flamenco.

It turns out that you are nowhere but in Brooklyn, New York as guests of the phenomenal quarter, Tavche Gravche, being taken on a musical journey that reflects their collective ethnic roots. Bassist Daniel Ori is the founder of the group and hails from Israel, as does guitarist Dan Nadel. Macedonia is represented by clarinetist Vasko Dukovski and percussionist Aleksandar Petrov.

Virtuosi all, the group's level of cohesion is extremely high, to the point of disbelief, as the band plays the arranged sections of a particular tune. In the more open sections, improvisation reigns, also at a very high level. Naturally, Dukovski, whose clarinet is the lead instrument, does most of the soloing, but Nadel gets his time also.

The music is very, very exciting with a driving energy generated by the intricate rhythms, expertly played. Ori's bass work is unobtrusive, but provides rock solid support, allowing Petrov, when he is playing either a drum set or a dual-pitched single drum to weave complex rhythms around the other players. Nadel has a jazz background, and he continually adds harmonic spice to the modal mixture.

Every member of the group clearly enjoys making this music and Tavche Gravche ends up being more than the sum of its parts. As much as the album is irresistible, these studio performances are but a shadow of what this band sounds like live. The title track, "Our Village" adds Ismail Lumanovski as a second clarinetist, and he takes the opportunity to really let loose -a live version is here, while Trigodini Stana (not on the album) shows Nadel taking an extended solo.

The various folk musics from which Tavche Gravche draws are all very physically exhilarating in and of themselves, but the art of the group shines as they communicate its essence while extending and enhancing it -creating emotions which cannot but be viscerally felt. Highly recommended.