BY DAN BILAWSKY
September 26, 2013
Sign in to view read count 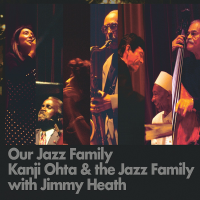 The music that appears on Our Jazz Family was meant to serve as an aural commemorative keepsake-of-sorts. Pianists Kanji Ohta and Toshiko Kiryu celebrated their fifteenth wedding anniversary by putting on a concert with their family and friends in 2002. The concert was recorded and kept as a private memento at first, but ten years later, as the couple celebrated their silver anniversary, they decided to share what they had made a decade earlier.

The music that appears here is straight-down-the-middle jazz with nary a curve ball in sight, and a casual, feel-good vibe carries the day as the album unfolds. The core group consists of Ohta and two dearly departed veterans who keep things running smoothly below the surface—bassist Earl May, who passed on in 2008, and drummer Jimmy Lovelace, who preceded him into the great beyond four years earlier. Four others also figure into the equation in various ways: Kiryu takes over the keys on two numbers, her daughter, Nabuko Kiryu, contributes vocals to "East Of The Sun" and "Strictly Confidential," David Gilmore adds some percussive touches via conga drums and tap dancing, and saxophonist Jimmy Heath joins the party with horn-in-hand.

Oft-covered numbers ("There Will Never Be Another You") sit next to Heath originals ("For Minors Only"), oldie-but-goodie items ("On The Trail"), and raucous bop-born pieces ("The Squirrel"). Swing is the thing for the most part, solos-a-plenty sing through the air, and a good time seems to be had by all, but nothing is terribly original here. This album, for the most part, is indistinguishable from the piles of recordings that have covered the same ground, but it still makes for an enjoyable listen. Heath, not surprisingly, is the strongest draw, whether coasting over the band or delivering slow-and-soulful sounds ("The Voice Of The Saxophone"), but the pianists are a close second.

Our Jazz Family, like any album, is a snapshot of a specific moment in time, but the significance of this one goes beyond the sounds that were made. This album is a celebration of the bonds that only family, friendship and music can create.

East Of The Sun; Tea For Two; On The Trail; For Minors Only; The Voice Of The Saxophone; Strictly Confidential; There Will Never Be Another You; The Squirrel; Credits.