Speeq: Or: Live in Strasbourg

By Eyal Hareuveni
December 9, 2007
Sign in to view read count 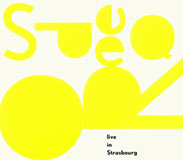 With such impressive and varied resumes in the left-of-center fields of European jazz and improvised music scenes, an uncompromising adventure is assured. Still, Or: Live in Strasbourg, from the group's third concert the Jazz d'Or Festival in Strasbourg, France in November, 2006—eight months after its first concert—exceeds even the wildest expectations. It is real magical gem and one of the best releases of 2007.

Endresen has developed a highly personal style of vocalization in recent years, based on short and swift syllables and phonemes that sound quite often spastic, percussive and even otherworldly. Sometimes this vocalization sound as if it is referencing the randomness and humorous Dada poetry of Kurt Switchers and Tristan Tzara, but on Merriwinkle (Jazzland, 2005) and One (Sofa Music, 2007) it left the impression of a provocative and cerebral exercise. With Speeq, Endersen's new vocabulary sounds much more relaxed and responsive to the others' gestures, and her idiosyncratic vocabulary gains a natural, emotional volume. A much more optimistic and democratic new Speaq, rather than a dark, Orwellian Newspeak.

On the first tracks, "Clean" and "Young, the always attentive Poulsen, Ex and Sanders breathe new and subtle sonorities and nuances into Endresen's warm vocal through remarkably organic, intense and trusty interplay. But as this recording progresses it sound as if Endresen is feeding them with her vocal cues in the same manner as they are attuned to her moves. The dense and busy beginning evolves into more meditative and storytelling pieces, and Endresen vocals express more moods and quite intelligible narratives, especially when she mutates syllables that sound almost as a common part of the English language.

More aggressive and distorted tones, and later free improvised segments, find their way to the mix. Poulsen uses various devices and objects on his guitar, Ex adds distorted, buzzing slaps and Sanders supplies sensitive textures, and the interplay between Endresen and the other players becomes wilder and looser. When Poulsen begins a playful, breezy Latin-tinged improvisation on "Their," Endresen joins him midway with an inspired hypnotic and chaotic narrative of her own that spins the relaxed playing into distorted and spacious regions.