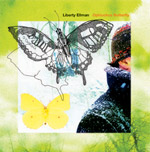 Ophiuchus Butterfly is guitarist Liberty Ellman's third release as a leader, but his widest exposure has come as guitarist in Henry Threadgill's acoustic Zooid ensemble. From the distinctive opening notes of the title track, one can hear that Ellman has been absorbing lessons from the master. Blending Threadgill's taste for multiethnic rhythms and Eastern scales with his own loose interpretation of urban M-Base funk, Ellman delivers a truly forward-thinking album.

The paired saxophones of Steve Lehman and Mark Shim make a winning combination. Lehman's involvement with the M-Base scene includes numerous collaborations with Vijay Iyer. His pungent alto tone and irregular phrasing are especially potent on the delicate ballad "Aestivation." Shim, a veteran from Ellman's previous album, is still perplexingly underexposed as a solo artist. He demonstrates remarkable technical facility and a surprising capability for abstraction, especially on "You Have Ears," which features rapid, turbulent chromaticism from his husky tenor.

Ellman trades his acoustic guitar for an electric with a bright searing tone. Hearing him zigzag through these abstruse harmonic mazes while weaving over, under and through metrically syncopated rhythms is enthralling, even more impressive than his acoustic work in Zooid.

Allowing for individual solos and collective improvisation in equal measure, Ellman elevates the intensity of these intricate pieces beyond mere vamping. An impressive release, Ophiuchus Butterfly is the sound of a sideman discovering his own sound and making inroads into the future.