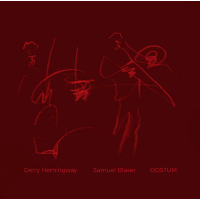 Swiss trombonist Samuel Blaser has developed a productive partnership with drummer Gerry Hemingway since the American's relocation to Switzerland. Hemingway also forms part of the latest incarnation of Blaser's Quartet as well as his Consort In Motion outfit, heard on A Mirror to Machaut (Songlines, 2013). Such alliances stand the pair in good stead as they embark on the spontaneous duet heard on Oostum, recorded in church in the eponymous village during the 2015 version of the quintessentially Dutch Zomer Jazz Fiets Tour (Summer Jazz Cycling Tour).

As always the stripped-back format encourages unalloyed exchanges, and in these expert hands, that's what you get over seven jointly-birthed pieces. Blaser, who has become one of the most talented trombonists on the scene, takes a finely-nuanced approach which contrasts passages of springy melodicism with occasional multiphonic chorales. Hemingway maintains a loose momentum tinged with meter, calling on his years of experience to select the most appropriate strategy at any given point. In fact they each find just the right sounds to match the other, as evident in the sudden central climax of "Mettle," erupting from almost inaudible beginnings, before returning to furtive susurrations to finish.

The sense of narrative in that same cut also highlights another of this set's merits. As bandleaders and composers in their own right, both men often create form through their improvisations leading to satisfying end results. "Balloon" furnishes a further example of empathetic listening as Blaser's suitably churchy lyricism shifts up and down the gears, paced by Hemingway's pattering undertow. But whatever the tempo, the two engaging personalities shine through in these unhurried conversational outings. The limited edition LP is also available as a download, including an extra track, the sprightly "Moons," which comes across as a flag-waving finale in this rarefied atmosphere.