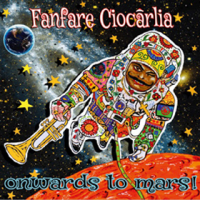 Onwards To Mars! is the twentieth anniversary release from the big Balkan brass band that is Fanfare Ciocărlia. One of the finest live acts on Earth, the band's energy, musicality and sheer unfettered sense of fun readily translate to record, making this album one of the most uplifting and cheerful collections one could wish to hear.

Fanfare Ciocărlia sets out its stall on the a cappella opening to "Crayfish Hora"—funny, unpretentious, and immediately engaging, it draws the listener in to the special world of Fanfare Ciocărlia. "Mista Lobaloba" melds outlandish vocals with impressively precise rapid-fire brass playing and an irresistible hook. For fans of vintage rock 'n' roll there's "I Put A Spell On You," a highly-charged, dramatic and often hilarious take on the Screamin' Jay Hawkins classic featuring Iulian Canaf's vocal. There's even a wry, downbeat, humor to "The Patron's Funeral."

Onwards To Mars! may well be the band's current clarion call, but if/when Fanfare Ciocărlia makes it to the Red Planet, then Earth's loss will be Mars' gain. Here's to the next 20 years.