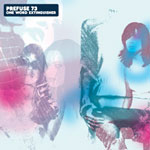 Of course, those who aren't stuck on old school thinking have adapted to the digital universe. Beyond the beat-boxing drum machine lies a whole universe of sound. When his full-length debut Vocal Studies and Uprock Narratives hit in 2001, Prefuse 73 landed in the spotlight; his music incorporated all the freshness of glitch, sample, beat, and scratch along with edgy words on top—plus or minus a few effects, of course. (The number in the name comes from the year in jazz that inspired the artist.)

Now older and wiser, Prefuse (aka Scott Herren, Atlanta native and current Barcelona resident) is back with One Word Extinguisher. No big surprises here, unless you never underwent the massive blow of Vocal Studies, of course. Prefuse goes up- and downtempo, but mostly the latter, digging deep into R&B roots but also scratching at the tip of the noise iceberg. He employs resonance and harmony reminiscent of late-'60s jazz, tossed together with stark crackling beats. The constant give-and-take between smooth and sharp—predictable and unexpected—helps define this record.

"Why I Love You" is an apt example of how Prefuse 73 transforms the completely analog sounds of the human voice into a new electronic instrument. Honey-sweet female vocals celebrate sweet soul over a beat that sounds like slow jam with electronic hand claps. They reach a melodic climax, then the beat starts fracturing. Bits and pieces fly away, the vocals disintegrate, and soon bleeps and blips punctuate the wreckage. But somehow, amazingly, the groove keeps on kicking and the singers sound just as alive as ever. That's the digital transformation. That's the magic.

Without any vocals, the music sounds intelligent, restless, and edgy—but it never really enters into the realm of difficult listening. Rock, groove, snap! Bump, stretch, glitch! When Prefuse applies his scalpel to the human voice, the music gains amazing energy. It's that man-machine thing, as if vocals deserve to be subjected to the same manipulation as keyboards, basses, and sine waves. (Word to the wise: avoid the very rare "real" raps on the record... not worth your time.)

Prefuse 73 continues to toy with the boundaries between man and machine, cashmere and nylon, old and new. That pervasive, subversive nostalgia can be quite enticing.

The Wrong Side of Reflection; The End of Biters - International; Plastic; Uprock and Invigorate; The Color of Tempo; Dave's Bonus Beats; Detchibe; Altoid Addiction (Interlude); Busy Signal ; One Word Extinguisher; 90% of My Mind Is With You; Huevos With Jeff and Rony ; Female Demands; Why I Love You; Southerners (Interlude); Perverted Undertone; Invigorate (Interlude); Choking You; Storm Returns; Trains on Top of the Game (Interlude); Styles That Fade Away With a Collonade...; Untitled; Untitled.