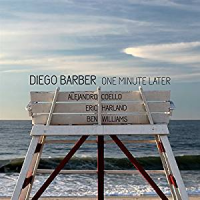 Diego Barber's One Minute Later is something of a dance between certainty and dubiety, grounded in the guitarist-composer's convictions that the truth behind an improviser's feelings and musical fate relate directly to that which Federico García Lorca described in Poeta en Nueva York as a minute of contrition that comes with—or follows— complete liberation. It's a concept that cuts to the core of Barber's being and the emotional state connected to many if not most of those who operate without a net, made all the more profound by the way he aurally realizes it with this sui generis grouping.

By tapping into two of jazz's most technically gifted rhythmic expressionists—drummer Eric Harland and Ben Williams—and bringing the skills of stylistically nonpartisan percussionist Alejandro Coello to light, Barber manages to knit a rich tapestry of possibility full of vivid colors and grooves, Spanish accents, and classical allusions. There's reciprocal respect involved in the way that these musicians move with and around one another, but there's more than enough room for each man to take the leap and deal with what comes one minute later.

If any piece can fully represent the way this foursome operates, it's the album opener—"Jacaranda." It's a number that takes its name from a blossoming Andalusian tree, hinting at the evolutionary tale to follow without actually giving any idea of what sounds may come. In the end, the purple-flowered jacaranda is represented by a minute of quizzical marimba work that gives way to concentric explorations coalescing in an expression of Mediterranean-accented jazz metal before cycling back to Coello's recital hall ambiance. It's the first, and most obvious, manifestation of the art of holding on while letting go.

The seven numbers that follow all further the philosophical, physical, and psychological ideals attached to the album's title. "Atlas," based on Barber's impressions of the mountains of Morocco, speaks to beauty, awe, and grandeur; "Dilar River" is a hip stride-and-flow statement built on the highly creative rhythmic foundations of Harland and Williams; the evocative "Mulhacen," the wondrously kaleidoscopic "Trevenque," and the groove-moored "Veleta's Peak" add to the catalog of Barber's musings on mountains; "Big House," showcasing Williams' wide-angle views and bringing the leader's instrumental patience and proficiency into view, proves to be a homey space with an open floor plan; and "Elvira Maria," a touching solo guitar piece dedicated to Barber's girlfriend, ends the album with hushed and loving tones.

While all of this music was recorded in New York, the album's heart belongs to Granada, Spain. That's where Lorca lived, that's Barber's girlfriend's hometown, and that's where the guitarist's mind's eye brought much of this music into existence. Those Spanish vistas and Lorca's poetic realizations fired Barber's imagination, bringing this sweeping and stunning work to life.