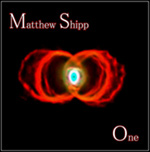 It might be argued that the solo piano recital is a fraught thing on record, and certainly there have been examples in the past where self-indulgence has taken over from the rigours of self-editing. Similarly, unless a pianist has at least a reasonably firm musical identity, it might be the case that the listener's attention starts to wander accordingly.

This particular example of the genre largely avoids such hazards, despite the fact that in places the spirits of both Mal Walrdron and Cecil Taylor stalk the ground. They are, however, a welcome change from the mannerisms of McCoy Tyner, out of which some contemporary pianists make a living.

Despite this, the old truism about a musician being his own man or her own woman is especially pertinent in Shipp's case. There isn't a single idea here that outstays its welcome, and on the likes of "A Rose Is A Rose" Shipp proves himself to be a musical explorer who is unafraid of taking his time, a point which more or less guarantees the absence of pyrotechnical flash. Instead, Shipp's approach is a far more personal one that is not at all dependent on such staples.

The very quality of sparseness might amount to the debt he owes to someone like Waldron, and this is most evident here on "Patmos," where Shipp patiently sets about the task of constructing the kind of stasis that was a hallmark of Waldron's mature work. At times like this, it's as though Shipp is more concerned with the sonic qualities of the piano as such, as opposed to any more musically conventional concerns.

Such comparisons do however run the risk of deflecting attention away from Shipp's individuality, which is the very thing that makes this programme so worthwhile. This is especially the case with a piece like "Gamma Ray," where the nature of his work is evocative at the same time as it's entirely his own.

If indeed it is the case that the solo piano recital is fraught with potential hazards, then Shipp manages to avoid them through the simple expedient of writing his own rulebook. In that respect, at least, he moves in select company.