By GLENN ASTARITA
September 30, 2013
Sign in to view read count 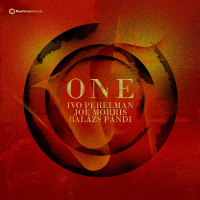 Brazilian saxophonist Ivo Perelman's inaugural recording for this progressive UK-based record label includes frequent companion, bassist Joe Morris and Hungarian drummer Balazs Pandi (Merzbow, ZU). As for Pandi, he's contributed to several albums for this label and brings a hardcore progressive metal and avant-rock realm of experience to the forefront. Otherwise, the trio launches a largely hyper-mode onslaught via potent rhythmic invectives amid the leader's ravaging flurries and climatic sorties into the upper-register.

Perelman is a cunning artisan. His heavy-duty outbreaks do not solely equate to a voracious sequence of barraging blowouts since he textures his sound with soul-drenched sentiment, and harmonious contours. He intermittently curbs the intense dialogues with self- interrogation type motifs. Here, Morris' fluid electric bass lines and Pandi's torrid polyrhythmic exercises are tempered on "What Love Can Lead To." Essentially, it's a scorching love ballad, heightened by Perelman's yearning choruses and tempered by a contemplative passage where he navigates the low-registers with understated coolness. However, Pandi broadens the horizon with undulating patterns as the proceedings eventually subside into a faint whisper.

"One" is an expansive duet between Perelman and Morris, containing edgy ruminations and free-bop phrasings. The saxophonist also injects shadowy melodic content into the schema and dissects the primary storyline into molecular components. They raise the pitch on "Universal Truth," ignited by Perelman's speed-demon style tactics above a popping groove. The trio's muscular presence comes into full stride, accentuated by Morris' exploratory solo spree and Pandi's programmatic- like drum solo, brimming with layers and phases that present an antithesis to your typical jazz or free-jazz drumming escapade. Hence, the musicians generate enough electricity to sustain a major metropolis. Indeed, a noteworthy entry into Perelman's vast discography.

Freedom; What Love Can Lead To; To Remember What Never Existed; One; Universal Truth; Stigma.