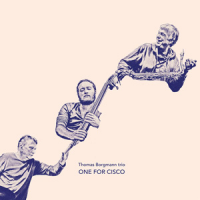 This limited edition LP documents a collectively birthed exploration spread across the two sides by the visiting German pair of reedman Thomas Borgmann and long time associate drummer Willi Kellers, who team up with NYC bassist Max Johnson. The concert took place as part of the New York Tenor Saxophone Festival at Ibeam in 2015 organized by Cisco Bradley of Jazz Right Now fame, hence the title. The trio constitutes a favored format for Borgmann. He's helmed two killer outfits in the past, firstly with bassist Wilber Morris and the wonderful drummer Denis Charles, then latterly with Morris and drummer Reggie Nicholson, until the bassist's untimely demise in 2002.

The title of a previous Borgmann album by the former triumvirate -Organic (The Lotus Sound, 1998) -perfectly sums up the gradual evolution championed by this threesome, from relaxed conversational interplay to something more urgent and propulsive. Borgmann carves out his insistent motivic and timbral variations with a broad breathy vibrato. However far out he goes, with falsetto asides and false-fingered bleating, there remains a melodic core to his work. One of the masters of European free jazz drumming, Kellers rarely settles into a regular rhythm, but there's always a pulse. His repeated phrases mesh well with the hornman, while the steady contrapuntal stream from Johnson's big-toned bass means he fits right in.

On tenor Borgmann plays as if he has some old spiritual at the back of his mind, never explicitly stated, but always informing his choices. Once he switches to soprano, he embarks on a serpentine excursion abetted by a thorny backing until he unhurriedly stills to a low key whistle. Well-versed in long form improvisation, the trio navigate such transitions adroitly, stoking tension only to plot release. After a squealing finale comes a gentle coda for delicately thrumming bass and the leader's toy melodica, to which Kellers adds a calypso lilt to close on an unexpected note. While not yet the equal of the aforementioned units (more time might be needed for that), they've set out a strong manifesto and an argument for sustained collaboration.