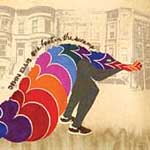 Coming from a member of eight-string guitarist Charlie Hunter's various bands for the past few years, reedman John Ellis' first release to receive national exposure might be something you'd expect to be filled with infectious grooves and catchy melodies. And, to be sure, One Foot in the Swamp has its share of both. But as much as tunes like "Happy have a joyful New Orleans swagger and singable theme, Ellis—truly a cosmopolitan player who has spent as much time in New York and the Far East as he has in the Deep South—is as rooted in a kind of urban extension of post bop as he is more earthy concerns. All of which make One Foot in the Swamp an eclectic album where the thread running through it is the common denominator of invention and spirited musical camaraderie.

While the three guests who appear on various tracks—guitarist John Scofield, trumpeter Nicholas Payton, and chromatic harmonica player Gregoire Maret (another Charlie Hunter alumnus)—add variety and richer colours to the palette, the album's fundamental identity relies on the consistent abilities of pianist Aaron Goldberg, bassist Roland Guerin, and drummer Jason Marsalis to adapt to whatever context Ellis throws their way. And, of course, Ellis himself, whose work on tenor and soprano saxophones, bass clarinet, and ocarina are less about chops and more about creating vibes—ranging from the Eddie Harris inflection of "One for the Kelpers to the more metrically challenging "Bonus Round, first recorded in a more straightforward fashion on Hunter's last disc, Friends Seen and Unseen.

Goldberg, seen last summer as a member of guitarist Kurt Rosenwinkel's quartet, sticks with electric pianos this time around, playing with directness on the funky second line of "One for the Kelpers and more texturally on the open-ended "Chalmette Shawarma. Marsalis demonstrates a lighter touch on the rumba rhythm of "Ostinato and more grit on the down-home funk of "Happy. Guerin is most conspicuous because of his ability to mesh so integrally with his surroundings that he is felt more than heard. He's the kind of player who doesn't stand out, but instead acts as a firm anchor, even on pieces like "Seeing Mice, where the solo section travels into a dream-like ambience.

As much as this is a showcase for Ellis, he's a democratic leader who leaves plenty of space for Scofield, Payton, and Maret—a player who seems to be getting around these days, working with artists including George Benson, Steve Coleman, and Pat Metheny, with whom he is currently on tour. Lyrical and imaginative, Maret is the first player since Toots Thielemans to put the chromatic harmonica in a real position of prominence, and he appears to have an equally broad reach, albeit in areas where one would never find Thielemans.

John Ellis may have One Foot in the Swamp, but with an album that is as modern as it is rooted, he is clearly stretching, successfully consolidating his already remarkable range of life experiences into clear focus.

Visit John Ellis on the web.