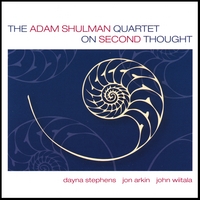 With On Second Thought, the Adam Shulman Quartet breaks through with its first CD, a selection of thoughtful and eminently accessible originals by leader and pianist Shulman. It features eight melodic compositions, melding perfectly the group's talented musicians, which include Dayna Stephens on alto, John Wiitala on bass and Jon Arkin on drums.

Shulman has been active in the San Francisco jazz scene since he moved there some six years ago, playing regularly in the Bay area with assorted groups. He paid his dues with renowned jazz artists such as Stefon Harris, Paula West and Bobby Hutcherson.

On his site, Shulman praises Bill Evans as a huge influence on him. This can be heard in the melodic force and use of chord voicing, as Shulman borrows from both classical and popular forms.

It is Stephens on tenor, though, who shines here. With his warm, breathy tone, he is right out of the Lester Young school via Stan Getz and, currently, Harry Allen. On this album, he delivers a string of peerless solos. On his way to becoming one of the best, he is currently leading groups in the New York area which sometimes include pianist Taylor Eigsti.

This praise is not to detract from Shulman, though. The two wonderfully complement each other, piano and sax weaving in and out of often contrapuntal, melodic configurations. Assuredly backing them are Wiitala's bass and Arkin's drums.

The ensemble shows up best on "For An Unknown Lady. " Both Shulman and Stephens have strong solos, and, near the end, Shulman's repetitive chords support Stephens' powerful statement. The whimsical "Bounce" takes off from the children's tune "Inchworm" and goes with it, providing fodder for Stephens' imaginative ideas.

After this, one looks forward to Shulman's next release.