By Troy Collins
December 31, 2007
Sign in to view read count 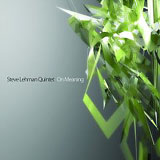 Saxophonist Steve Lehman is a Fulbright scholar and former student of legendary saxophonists Jackie McLean and Anthony Braxton. His recent collaborations with pianist Vijay Iyer and guitarist Liberty Ellman have found him further expanding the intricate polyrhythms and asymmetrical structures that define the M- Base aesthetic. Incorporating the angular polyphony of Braxton's concepts with the advanced rhythmic foundation of his peers, Lehman offers a refreshing slant on contemporary traditions.

Returning to the acoustic quintet format, Lehman is once again joined by veteran bassist Drew Gress and vibraphonist Chris Dingman, both featured on his debut. Frequent collaborator drummer Tyshawn Sorey (a member of the trio Fieldwork with Lehman and Vijay Iyer) and trumpeter Jonathan Finlayson round out the ensemble.

Lehman's writing is dense and intricate, weaving thorny microtonal harmonies ripe with interlocking counterpoint into fluid rhythmic cells driven by metric modulation. Despite their profuse nature, these pieces never sound overly academic, as the quintet imparts a human element to these labyrinthine compositions, executing them with vigor, lending even the most circuitous sections a sense of soulful verve.

Lehman uses myriad facets of the saxophone vocabulary, incorporating multiphonics, extended techniques, microtones and all manner of bent timbres and tones into his rapid-fire, circuitous phraseology. Finlayson is a stalwart foil; lyrical and vivacious, he trades punchy, euphonious lines with Lehman on "Analog Moment," burning white hot on the spiraling coda of "Curse Fraction."

Clocking in at a brisk 45 minutes, the sheer concentration of musical ideas justifies the album's abbreviated run-time. With On Meaning, Lehman has established himself as heir apparent to Greg Osby and Steve Coleman's legacy, advancing their innovations into the future.