By Brandt Reiter
November 10, 2009
Sign in to view read count 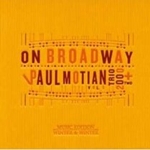 The brushes are out as drummer Paul Motian continues his ongoing disc series, On Broadway. This latest installment features Motian's less starry "2000" trio, with bassist Thomas Morgan and saxophonist Loren Stillman, plus a second saxophonist, Michael Attias and pianist Masabumi Kikuchi (who also participated on Vol. 4). Two decades on, the recipe remains the same—loving, thoughtful explorations of mostly Broadway tunes by one of jazz's great skins-men.

This volume is perhaps the most intimate of this intimate series; with the exception of the disc's opener, the vaguely North African-tinged "Morrock" (a Motian composition and the sole original on the record), the tempos here seldom rise above the slowest of slow crawls. Which is fine: few drummers have Motian's startling gifts of color and variation and most of the thrills on the disc come from the boundless, gentle melodicism he seems to wring so effortlessly from his kit.

There's an especially tender version of "Something I Dreamed Last Night," on which the two saxophones intertwine with the tentative fragility of frightened lovers; a rather astonishing "Just a Gigolo," whose mournful reading here cuts straight to the bone; a deeply melancholic "A Lovely Way To Spend An Evening"; a softly angular and Monk-ish "Midnight Sun" and what is probably the most meditative version of Frank Loesser's "Sue Me" you'll ever hear. It is, in sum, an excellent addition to the series, but does come with one caveat: while Kikuchi's piano is often exemplary (his intro to a marathon "I See Your Face Before Me" is just exquisite), he has an unfortunate tendency to vocalize along with his playing that can wreak havoc on the disc's finely wrought, intensely delicate, deepest deep-night mood.

Morrock; Something I Dreamed Last Night; Just A Gigolo; I See Your Face Before Me; A Lovely Way To Spend An Evening; Midnight Sun; Sue Me.