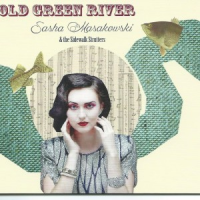 There is a rare musical triple point where talent, vision, and a wicked sense-of-humor meet. Damn few artists ever make it there. I believe that it must be the address of one Sasha Hildegard Masakowski. NOLA's own has recently relocated to the cultural hub of the universe, New York City, but not before navigating the choppy and often decadent waters of this past Carnival and Mardi Gras season to record a throwback to not the '30s and '40s but the '10s and '20s and earlier called Old Green River. That alone would be more than enough to make this recording something special. Listening to it, side-by-side with Masakowski's last project, Hildegard (Self Produced, 2015) is downright mind bending.

Pronounced in the mix are guitarist Russell Welch and trombonist Colin Meyers. Together, they comprise the rhythm and solo soul of the recording. Welch plays an infectious brand of Hot Club guitar crossed with a slightly sharp miniature guitar. Meyers' trombone is beautifully fragrant and boozy. Drummer Paul Thibodeaux appropriately lays down the necessary NOLA shuffle beat which is de rigueur for this reagions music. Masakowski's father, Martin round things out playing bass and nailing down all four corners of the music.

That said, front and center is Sasha Masakowski, who embraces these old songs with a cheerful fervor and dedication. She nearly purrs her way through "Until the Real Thing Comes Along" and the definitive "I'm Getting Sentimental Over You." She reprises "St. James Infirmary" from Wishes in a more stripped down basic version as close to gutbucket as we get on this disc. Masakowski and her surrounding musicians are a bottomless loam of joy, surprise, and inspiration.