BY JEFF DAYTON-JOHNSON
May 7, 2006
Sign in to view read count 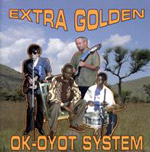 Otieno Jagwasi is the quintessential benga musician. Born in Kenya's western Luo-speaking Nyanza Province, the cradle of the local style, he was a child prodigy on the fiddle-like orutu, which, when transposed to electric guitar, became the substrate of benga. He played with Circle K, a band that split off from benga godfather D.O. Misiani's Shirati Jazz. He gigged intensively, raised chickens and led two popular Nairobi bands—Extra Solar Africa and Orchestra Hits International—scoring some local successes. And then, shortly after recording Ok-Oyot System, he died, ravaged by disease, in May 2005 at the age of 34.

Among his other accomplishments, Otieno worked with Ian Eagleson, a guitarist with the Washington DC-based rock 'n' roll band Golden, to help him research his ethnomusicology PhD on benga. That academic partnership led to Extra Golden, a band uniting members of Extra Solar Africa and Golden, and this record, recorded on Eagleson's laptop in a couple of Nairobi nightclubs during the day. As such, the record has the intimate ambiance of a jam session among an empathetic set of players, rather than a full-fledged dancehall performance. The setting makes it easy to hear all the parts, notably the deliciously economical funk of Extra Solar drummer Onyango Wuod Omari.

Simply put, the record is pure guitar pleasure. It's hard to say who is playing what amidst the overdubbed guitars, but there is one voice that is swirling, with ample use of the pedals and a crisp Latin influence (inherited from Congolese rumba), and another more likely to use a rock 'n' roll-style fuzz tone. The record is a genuine fusion, although clearly dominated by benga. When the music is at its best, as on the title track, English-language harmonies from Golden's Alex Minoff and Eagleson trade off with Otieno's sober, slightly melancholy baritone with the same groovy empathy that marks their guitar interplay.

The boys from Golden provide two rock 'n' roll numbers. "Tussin' and Fightin' is less successful in this context, but "It's Not Easy, buoyed by a fragile falsetto and country-soul beat, manages to evoke Curtis Mayfield.

"Ok-oyot" apparently translates as "it's not easy, a catchphrase employed by benga musicians to refer to the burdens of everyday life—but it could equally apply to the deceptive ease of the complex music they produce. Otieno's guitar and voice allow both interpretations. Though benga, and East African guitar music more generally, have been amply anthologized in the world music domain, Ok-Oyot System will probably provide most listeners outside Kenya with their first introduction to Otieno. His death casts a shadow over this record because it is an introduction that most listeners will want to renew.

Ok-Oyot System, situated at the marginalized intersection of two genres (world music and indie rock) themselves marginalized by the global hit-making machinery, runs a very real risk of slipping through the cracks. And that would be a great shame.