By JOHN KELMAN
January 4, 2008
Sign in to view read count 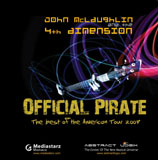 With guitar icon John McLaughlin's Fall, 2007 North American tour with his new group, The 4th Dimension, a thing of the past, Official Pirate: The Best of the American Tour 2007 gives those lucky enough to catch the tour a chance to revisit and reassess. The digital download-only release also provides an opportunity for those who didn't make it to the shows to hear what they missed. While excerpts from the group's first show in Durham, North Carolina on September 13 were made available on CD-R the next day as Official Bootleg (Abstract Logix, 2007), capturing the energy of a group still discovering itself, Official Pirate provides a more balanced view of the group, culled from board recordings made throughout its seventeen-date tour.

Early into the tour, McLaughlin had settled on a consistent set list, with material dating as far back as the gospel-tinged "The Unknown Dissident," from Electric Dreams (Columbia, 1978) and as recent as the more energetic "Senor CS," from Industrial Zen (Verve, 2006). Potent versions are included, along with "Raju" and "5 Peace Band" from the Shakti catalog, both reinvented here with more expansive harmonies that were implied but never fully realized by McLaughlin's East-meets-West explorations.

While tunes like the balladic "Nostalgia," the thematically mind-blowing "Hijacked" and the episodic closer, "Mother Tongues" have been performed on other tours with other groups, the intensity and outstanding interplay between McLaughlin, keyboardist/percussionist Gary Husband, bassist Hadrien Feraud and drummer Mark Mondesir make them as good as any already available.

"Mother Tongues," a thirteen-minute tour de force for the entire group, may well be the definitive version. McLaughlin and Husband both get individual solos up front that push the limits of virtuosity, but it's when the group heads into a middle section of fiery trade-offs that things really ratchet up. With Husband switching to his quirky jungle kit—highly tuned bass drum, snare and tom, along with two of the clangiest, industrial-sounding cymbals you'll ever hear—the power of two percussionists and the unmistakable fun they had working both off each other and in stunning synchronicity is something that doesn't need to be seen; it's clearly heard.

While the playing is largely fierce throughout, the group does know how to pace a set, with "Nostalgia" and the equally lyrical "Maharina"—featuring a particularly lyrical piano solo from Husband—providing brief respites. Still, even on the up-tempo tunes technical fortitude is never a substitute for focus, construction and attention to detail; it's simply a means to a very musical end. There may be plenty of high velocity playing, and at times Husband's synth is clearly more textural than thematic, but this is a group that burns in a way that manages to retain a surprising melodism.

Available only through Abstract Logix, the nearly eighty-minute Official Pirate captures some of the finest moments of McLaughlin on his first North American fusion tour in nearly a decade. On the strength of this release, hopefully another ten years won't have to pass before he returns.