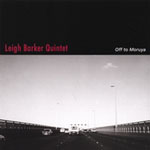 On the subject of music, bassist Charles Mingus was once quoted as saying, "You don't listen to one instrument; you listen to the music." When it comes to the music featured on the Leigh Barker Quintet's Off to Moruya, you don't just hear music, you hear good music. Originally released in the group's native Australia in 2005, bassist/composer/bandleader Leigh Barker made the decision to re-release the album more than two years later using independent sites like iTunes and CD Baby to market and promote the record abroad.

From start to finish, the playing on Moruya has a sound familiar and well-suited to American jazz audiences. Sounding as if they studied all of the great jazz from the 1930s through the 1950s before recording this album, the disc features all original music from Barker and several members of the quintet. Complete with ballads (..".And Never Will Be," and "Lonesome Night"), a Lindy-hop evoking tune ("Merimbula Part One"), a blues ("The Blues in Two Parts") and straight-ahead, smoky jazz club in old Harlem feeling songs ("Rays Dilemma," "Sprained Wrist") in addition to several other well-written songs, this disc covers a lot of musical ground.

The appeal of what Barker has accomplished with Moruya is that his position within his group allows the music to be the representative instead of his choice of instrument. Only once does Barker take a solo ("The Blues in Two Parts"). The rest of the time each group member plays in a manner that gives way to each sound bleeding into the next, ultimately producing the sound that is music. There is no superstar overplaying or undercutting of each other. Each member has a role—sometimes leading, sometimes playing the background and sometimes accompanying—and is always present.

While it would have been nice to hear Barker put himself in the forefront on a few more occasions (since Barker notes in the disc's jacket that his self-penned "Lonesome Nights" was dedicated to the love of his life, a bit more bass would have made the song more personal), Off to Moruya is a great tribute to jazz.

Title: Off to Moruya | Year Released: 2008 | Record Label: Self Produced