By Troy Collins
November 29, 2009
Sign in to view read count 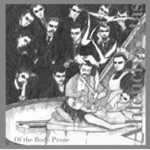 Invoking the lysergic Spaghetti Western drama of Ennio Morricone, the meticulous formalism of King Crimson, the spiky angularity of Captain Beefheart's Magic Band, and the aural violence of Massacre, the trio draws from an array of genres for their eclectic, episodic compositions. Their stylistic diversity reaps impressive dividends, aided in part by Perloin's decision to expand his palette, augmenting his previously clean guitar tone with distortion, reverb and various EFX. Embracing a wider spectrum of sound, his kaleidoscopic fretwork helps make this album the trio's most sonically diverse of their career.

Revealing their stylistic breadth, "Owls" finds the trio careening on a tightly syncopated punk-funk groove reminiscent of the Minutemen, while the intricate math-rock of tunes like "Racing Towards the Hard Kernel" and "Making the Most of the Apocalypse" are indicative of their oeuvre. Jump-cut styled transitions feature torrents of searing fretwork, pungent bass palpitations and kinetic trap set ruminations scuttled through labyrinthine themes, blistering tempo changes and cagey stop-start rhythms. The closer, "Map's Tattered Edges" is an epic tour-de-force of genre experimentation. The nine minute-plus journey seamlessly modulates from brusque metallic shards and ambient pointillism to an anthemic post-rock coda.

Relying on quicksilver transitions and fragmentary themes, these effusive through-composed pieces blur the line between the composed and improvised, trading long-form melodic development for impetuous virtuosity. Challenging yet rewarding, Of The Body Prone is a masterful example of contemporary instrumental prog-rock at its most adventurous.