Pyeng Threadgill: Of The Air 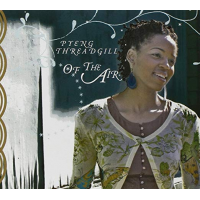 Of the Air, an album of original music that cuts a broad stylistic swath, is focused and honest, traveling through various contexts organically. There are several reasons for the honest coherence of this music. The CD is recorded in analog with a core group of musicians, a working band rather than a collection of heavy-hitters or hired guns. Lisa Mezzacapa (bass), Shelly Doty (guitar) and Micha Patri (drums) give it up to tunes that center around Threadgill's voice and imaginative lyrics, which can be thoughtful, playful or sardonic.

Labelling this music jazz vocals would be limiting, yet jazz aesthetics (is there such a thing?) sow the seed of much of this music. The jazz impetus is given away by the vocal interaction with the band, Threadgill's bluesy phrasing, swinging drums, rich acoustic bass, and original lyrics on tunes like "Ambrosia and Fats Waller's "Jitterbug Waltz. Surely "Jitterbug Waltz has been covered by hundreds if not thousands of artists, yet Threadgill's version has a fresh and joyous swing to it that's irresistible. "Power Trip uses a saxophone choir and "Wishing Well uses overdubbed cellos (played by Dana Leong) to orchestrate the music and frame the voice in yet another setting that calls for attention.

The playful, clever words of "It's Late hit you as they peek out from the grooving Latin rhythm section with a slightly jesting effect. "Inner Lining has an infectious groove, but it never overpowers the lyrics, and in fact the song ends with just voice. Threadgills deliverys the words in a gentle but powerful fashion, haunting into the silence before the next track. "Close to Me is sweetly swaying, with acoustic bass driving the bottom, a marimba adding rhythmic snap, and a sustained guitar that floats in and around the voice and the other instruments. Of The Air has an atmosphere of peaceful confidence, evidenced when Threadgill sings in "Caterpillar Crossing, "watch the dreaming that you've done materialize, inch by inch, row by row. These legs are unstoppable. See this garden, watch it grow.