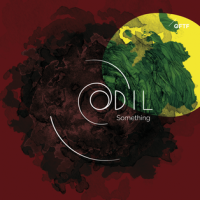 With an intuitive rhythmic malleability worthy of a drummer, Camille-Alban Spreng is the kind of pianist who enjoys playing fast and loose with meter as much as melody. The compositions on Odil -Something center around motifs that are intricate yet propulsive, which his quartet handily dashes off with easy flair. They can sound like a classic acoustic group or a funky fusion ensemble when the keys turn more electric, and the songs have no problem shifting and adjusting accordingly. These really aren't melodies to stick in your ear and have you humming for days, but there's usually a pulse to be felt through your whole body instead.

The quartet shows a taste for being both groovy and formless on this release, usually alternating both within the same piece. The "Noirmout" bookends offer the most abstract moments; otherwise they're most likely to sandwich the loose or atonal passages in between spry rhythmic workouts. They don't arrange for conventional solos, but might carve spaces where someone or other happens to be prominent in the mix more than usual. The fusiony cabana of "Hübschi Biel" has horns stay in fluid unison to let the piano and synth paint angular shadings on top, while "Jofraise" starts with the drums loose and skittering, then abruptly drops everything except some wild swooping organ. With "Something to Be Done" it's the sax that's right out front for a minute of intense sheets-of-sound squealing. Everyone plays his part with aplomb in service of the bigger picture.

Spreng and friends like their melodies quirky and their funk with a little bite to it. The mix occasionally dips into elements from the past such as the odd overdriven fuzz-synth, then handily drags them straight into the present. This is clearly an ensemble happily restless and at home in several different worlds (often at the same time). Hip isn't dead at all; in hands like this, it's alive and vibrant enough for today and tomorrow.