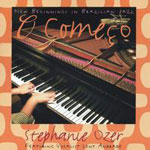 Stephanie Ozer sure knows how to seize an opportunity.

While on a ten-day vacation in Brazil, the California-based pianist chanced into a meeting with the great bossa nova vocalist Leny Andrade. Andrade agreed to record with Ozer on the spot, and within a week the two were laying down an after-midnight session at a Rio studio. The resulting four tracks form the core of O Começo, a romantic album of bossas and sambas that eloquently displays Ozer's tasteful piano style.

Andrade's throaty singing, delivered with a world-weary moan, tells of depth and experience. When she reaches the aching bridge of Ivan Lins' ballad "Meu Pais (My Country) or bounces into some light scatting in the upbeat "Rio, the moment is utterly winning. Ozer, who carries a rhythmic role on these songs, enters a more direct interaction with Andrade in "Velho Piano (Old Piano), proving to be a sensitive accompanist.

Ozer gets the spotlight on eight instrumentals recorded in Berkeley, California with a mix-and-match sextet of local musicians. Her playing is elegant and precise, balancing a strong rhythmic approach with a light touch and subtle harmony. "Infinite Love, a solo take on a Toninho Horta ballad, glides easily through shifting moods and colors. Ozer's economical style places the occasional trills or dives into lushness in stark relief, giving them added weight and meaning.

Although Ozer wrote all the arrangements, there is only one original composition on the disc. "Bronx to Brasil is a tone poem in two parts, beginning quietly with some tightly arranged and tasty horns, then sliding into funky urban jazz led by Fettig's alto sax. It's a well-conceived piece that, unfortunately, is just too short at four minutes to fully deliver on its promise. Perhaps in future albums Ozer will allow herself to stretch out a bit more and reveal more of her compositional side.