By Eyal Hareuveni
November 13, 2011
Sign in to view read count 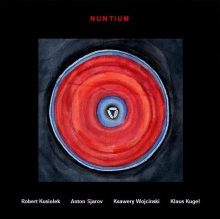 Polish-born/German-resident , composer/accordionist Robert Kusiolek has created an arresting concept of sounds, themes and patterns for his debut as a leader. Nuntium features minimal improvisation that draws from modern contemporary and avant-garde aesthetics, as well as jazz and folk and ethnic traditions. All seven cinematic improvisations feature a clear architecture and stress intimate and receptive interplay without sacrificing individual articulation.

"Chapter 5" presents the tight, almost telepathic interplay between Kusiolek and Sjarvo, both of whom can move instantly between minimalist gestures to high-octane dense improvisations, while Wójciñski and Kugel challenge these flights with their own invented chaotic sounds. "Chapter 6" is less intense but still follows a loose structure that patiently accumulates and reveals its clever, minimalist architecture. The classically trained Kusiolek closes this beautifully performed cycle with another mysterious, minimalist piece, often similar in spirit to the opening, proving yet again that even minimalist expressions can tell a rich and detailed story that can linger in the mind and demand many listens.