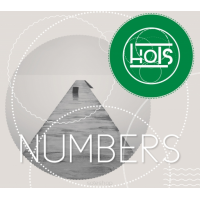 Poland's HoTS quintet makes its own mark on European modern jazz, led by composer/guitarist Mikołaj Poncyljusz. The band takes its name from the title of their first album, Harmony of The Spheres, and the Pythagorean mathematics referenced there continue in the numerical titles given to all but one of the tracks on Numbers. Opener "#26" shows a band in the Blue Note hard bop tradition, the twin horns of trumpeter Radosław Nowak and tenor saxophonist Bartosz Tkacz leading the way with relaxed swing. Then the leader takes over for the first of five brief unaccompanied improvised Interludes, each featuring a different band member.
The album structure of numbered pieces separated by interludes may appear stiff and formulaic, but it flows quite naturally, not least because the players all make the most of their individual showcases. The improvised interludes are as lyrical and thoughtful as the compositions; there is no grandstanding. "#25" serves as the ballad of the set, more or less—if there is a weakness in the material, it's a tendency towards medium tempos. At just over eleven minutes "#28" is the longest track, and makes use of the time for a languid unaccompanied bass solo, which is then joined by the saxophone. The ensuing guitar solo adds to the textural variety by building to a big chordal climax.
At just under two minutes "#23" is the shortest selection, shorter than any of the improvised interludes. It's a catchy up-tempo Latin tune that moves into a swing feel, and could have easily maintained interest for much longer. Closer "Diuna" makes up for it by exploring similar Latin and swing territory before transitioning to a closing rhapsodic rubato section, a satisfying end to the program. Poncyljusz may be the sole composer, but the group feels like it has a collective identity, a voice that is the product of everyone's contributions.