By Friedrich Kunzmann
March 17, 2019
Sign in to view read count 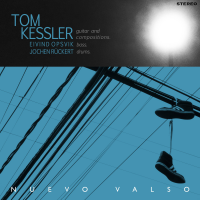 For his fourth album as a leader Mexican guitarist Tom Kessler gets drummer Jochen Rueckert and bassist Eivind Opsvik on board to deliver nine, self-penned and diverse pieces. Opener "Ascilina" demonstrates the treats that the trio brings to the table. Intriguing voicings on guitar, buzzing melodic lines on bass and an understated percussive structure. The production is crisp and dry.

Much on Nuevo Valso presents itself in similarly subtle fashion. Kessler's guitar radiates an earthy vibrancy, giving the entire session an acoustic feel. At no point does the guitar's sound deny its wooden origin and instead embraces it.

In a diverse pool of traditional blues structures, ballads and post-bop numbers, Kessler exhibits his dexterous and versatile skillset as a composer as well as a guitarist. At the same time he is a full-on team player, giving his colleagues ample space. While the slow-paced tango "Swanzira" sees Opsvik making use of the bow, the South American rhythm exercise on "Chasquinho" gives him the opportunity for another short but expressive solo.

On one level, Nuevo Valso brings a traditional approach to jazz heritage. On another, it leans towards the unexpected—be it because of unorthodox drum shapes, exciting guitar effects or an unusually melodic and prominent bass. It's nice to see that the traditional guitar trio format is far from done being explored and still has plenty to offer, without necessarily undergoing a radically modern-electronic approach.