BY JOHN EPHLAND
December 10, 2014
Sign in to view read count 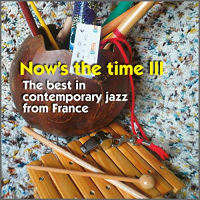 Every. One. Of. These. Tracks. Is. A. Keeper. To be swept up in a fervor when listening to music (always an unexpected pleasure) and finding it next to impossible not to write about the experience—during as well as after—is the dream all music journalists crave and celebrate every time they find themselves returning to that zone. Indeed, and in case you didn't know, every one of the writers you read here at allboutjazz.com writes for free. Why? My guess is because they 1) haven't been given a paying assignment on what they are writing about, 2) they just need to write, to get it out of their system or (my all-time favorite) 3) they have to, are so moved to write because, like a secret you can't keep, they are celebrating, they have to share what just happened to them. And, in the music journalist's case, that means sharing it with others, both near and far through their writing. All told, I'd venture to say my colleagues here at AAJ share a passion to express the inexpressible experienced when jolted by certain musical sounds.

As for the rapturous cause of the present effect, or affect, a full discourse would take many more "pages" than this column is designed for. Entitled Now's the time III: The best in contemporary jazz from France & Luxembourg, 13 tracks cover a digest of what's been happening from a country always brimming with art, some of it jazz. But nowhere this year, or perhaps in recent memory, has a collection been so intriguing, diverse and creatively resonant to this listener. A compilation, it bears but does not reflect the reputation of being an assortment of goodies, a summary of snacks that smack ... of formula, most likely imported and barfed out from the usually unremarkable American music business mindset. (In other words, trendy, topical, boring.)

The complete list of bands contained herein is listed at the bottom of this review. Room only allows for a sampling. Again, and to repeat, the threat to making a compilation is either to devolve into a breezy snooze or gathering tired variations on a theme. Which makes this collection (and most likely volumes I and II, which feature music from other parts of the world) such a great listening experience.

Complied by Kevin Le Gendre, the moniker "the best in contemporary jazz" might throw American fans, given how that word means something different stateside. Refreshingly, "contemporary" here translates into innovative or even experimental at times. The music, generally speaking, is jazz in that it is improvisational, tends to have an elastic rhythmic feel from track to track, and the emphasis on composition exists in support of the players. Songs range from just under eight minutes (the opening rat-a-tat- tat, peppy horn-and-electric-piano "Tongs Of Joy" by the Orchestre National de Jazz) to what amounts to an almost brief interlude at just over one minute (Pascal Schumacher's playful "Here We Gong"). Many labels are represented, 13 for 13. Liners include all the musicians performing for those interested in following up on what they hear.

A message of joy seems to be made clear with the move to the second track, electric pianist Benjamin Moussay's rapid-fire fusion-like trio spree in 7 with the appropriately titled "Hopalong." More off-kilter funk with the second of under- three minute frolics with tenorist Alban Darche's trio on the oddly titled "t.b.b.m" before things start to get real interesting with "Yompa," another odd-meter but acoustically adventuresome trip turned in by the Benoit Delbecq Unit, featuring dream- weaver pianist Delbecq with Mark Turner on tenor saxophone, violist Oene Van Geel , bassist Mark Helias and Emile Blayenda on drums. This tantalizingly, melodically wayward and grinding, groove-laden track was the one that got me back into listening to everything here. A standout killer in 3 that makes you want to hear the rest of the album. From there it's outright funk with no fancy dancing. Actually more rock than funk, "Palabre" is a saxophone workout between Matthieu Donarier and Tony Malaby (both trading their tenor and soprano horns with themselves as well as each other), these squealers and dealers amply supported by leader/bassist Stephane Kerecki and Thomas Grimmonprez on drums.

By now, for those paying attention to such, it's clear this is not an all-French outing.

Maybe my favorite cut to date is the next one, "Blues Nippon," by the exquisitely titled group Donkey Monkey. Like many of these tracks, the music here could be used for some kind of visual antics, maybe dance and/or film. It's a duo playing intense, almost robo-jazz-rock in 4 with sudden bursts of abandon even while keeping a straight line through it all. Drummer Yuko Oshima and pianist Eve Risser play as if from one musical mind as they clamor forth, back and forth, backwards and forwards. And the on-spot chorus vocalizing layered in keeps it all on the straight and narrow. Han Bennink would feel right at home. Something more akin to Gil Evans comes with another other-worldly cut, "3+2+3," by the Lionel Belmondo Hymne Au Soleil ensemble. Once again, we've got one that begs for the full recording, as we are back again in off-kilter country with an incessant groove, floating horns improvising over an irresistible groove. It's electric funk with an extended cast of eleven, which includes bassoon, tuba and the kitchen sink. And, once again, over too soon.

Not that everything's ideal, perfect or magisterial. That's not jazz, I hate to spill the beans. But, truth be told, it keeps staying better till the end.

"What is French jazz?" Le Gendre's press release offers. "There is no quick and easy answer," the differences more obvious than the similarities. Hard to argue, as if arguing was even necessary. You can say, however, French jazz circa 2014 is restless, it's unpredictable, it's impossible to generalize because it's innovative from track to track, and it's (at the risk of generalizing) just a bunch of fun. Perhaps there's some pathos on tracks not included, so I guess Now's the time III is stuck with being one helluva party.