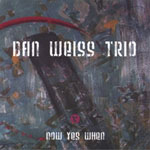 Dan Weiss sure gets around—the past month has found him on releases by Rez Abbasi, David Binney and Rudresh Mahanthappa. He's a flexible drummer with big ears and an ability to navigate the most complex of compositions without sacrificing spontaneity, so it was inevitable that he should finally release an album under his own name. Now Yes When, his second release, features his trio with bassist Thomas Morgan and pianist Jacob Sacks, demonstrating a degree of deep musical thought rare for such young players.

Weiss' writing showcases strong rhythmic elements, but in unexpected ways. "Not Yet, named for the gradual unfolding of its lengthy melody, begins abstractly, Morgan anchoring underneath Sacks' sparsely dark improvisation and Weiss' light polyrhythmic cymbal work. The tension and dynamics build and Sacks and Weiss become more active and interactive; the gradually unfolding theme comes in ever-lengthening bursts until it's finally realized in full by the song's end.

Repetition is another aspect of Weiss' style, but again with a degree of unpredictability. The melodic "For Samirji is based on a number of distinct musical motifs repeated in an almost mathematical pattern. There's little precedent in improvised music for what this trio does, though Weiss' Indian influence means that harmonic movement is hinted at more through linear movement than chordal accompaniment. But the recording manifests a clear jazz-centricity: Morgan takes an idiosyncratic but purposeful solo which leads into Sacks', where Weiss dissolves the rhythm, gradually building it back up as the trio enters a vivid three-way conversation.

Weiss also has an ear for texture. "Wizards begins with guest trombonists Jacob Garchik and Ben Gerstein in duet, but leads into a frame drum-based core with a Turkish folk song-based melody. It's the most change-based piece of the set, but more through insinuation than overt statement. "Richard Dawson is moodier, with Sacks' spare theme layered over powerful shots from Weiss, while the lengthy "Granollers Slayer is deceptive—as lyrical as the album gets, but complex and idiosyncratic nevertheless.

Freewheeling though it may be, an underlying logic underpins the trio's most obscure excursions. The next year will be a busy one for Dan Weiss, including various projects: a solo tabla album, a duet record with drummer Ari Hoenig, and a "doom heavy metal project with Bloody Panda. Hopefully his busy schedule won't preclude more time with this trio. Now Yes When isn't an easy listen, but it's a multifaceted one, and a constant revelation that positions the ambitious and intrepid Weiss as an artist with a bright future.