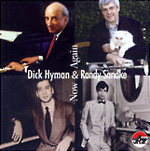 The pairing of Dick Hyman's inventive keyboard with the golden tones of Randy Sandke's mellifluous trumpet make for a set permeated with admiration for Louis Armstrong and Bix Beiderbecke. Hyman, who long ago studied with Teddy Wilson, has been prolifically dedicated to preserving and promoting jazz repertory. Among his many outstanding recordings are classic outings with Ruby Braff and Maxine Sullivan.

Here the duo recalls, through mostly classic '20s and '30s tunes, the vibrant spirits of Pops and Bix without being merely imitative. Hyman's own "Thinking About Bix has fragments of "I'm Coming Virginia and "In A Mist thrown in for good measure and allows Sandke to toot joyously with barrelhouse backing from Hyman. Beiderbecke's "Out of Nowhere opens with a few gently tinkling bars from Hyman reminiscent of a toy piano. Gradually, the tempo picks up, with Hyman discreetly punctuating Sandke's full-bodied trumpet. These guys sure know the value of taking their time.

As a composer, Sandke is represented on the set by "The Wizard, which is dedicated to Hyman, and "Two As One, which begins with a lengthy melodic piano solo introduction. When Sandke joins in, the piece transforms into a wordlessly expressive dialogue between old friends. And what a difference it makes when two hoary old chestnuts like "I Want to Be Happy and "Makin' Whoopee are reconsidered by these musicians. They manage to discern previously unnoted darker, after-hours elements in these tunes.

Whether they're having a blast with Gershwin's "Bronco Busters (from Girl Crazy) or lending a pensive consideration to Bernstein's "Lucky to Be Me (from On the Town), the opening tune's title is an accurate statement about this happy Hyman-Sandke connection: "You'd Be So Nice To Come Home To.

You'd Be So Nice To Come Home To; I Thought About You; I Want To Be Happy; Weatherbird; Out Of Nowhere; Thinking About Bix; Slow River; Joy Spring; Wild Man Blues; Dancing In The Dark; The Wizard; Two As One; Bronco Busters; Lucky To Be Me; Makin' Whoopee.