BY DOUG COLLETTE
September 8, 2018
Sign in to view read count
Bereft of forced funk and over-complicated compositions, jazz-rock fusion can be as liberating as the best rock and roll. That is, if the technical expertise brought to bear is restrained and sublimated to the unity of the ensemble and the musicians involved play with the unity of a true band. Then the emotional expression usually contained in song lyrics permeates the musicianship. Witness the work of Chris Lightcap and company as well as Jonathan Goldberger, JP Schlegelmilch, Jim Black: maintaining a relatively simple approach to composition and arrangement, the musicians on this pair of recordings drain the hybrid phrase of its negative connotations and imbue it with a durable novelty. Companion pieces of the highest order, these two LP's will just as likely mesmerize the mind as motivate the body. 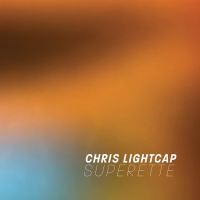 Electric guitars rippling gracefully in time with kinetic drumwork accented by flourishes of (the leader's) bass, Superette is as dynamic as it is dramatic, directly reflecting the various and sundry prior projects of Lightcap and his collaborators, including, at selected junctures, guitarist Nels Cline and keyboardist John Medeski; a distinct distillation of those stylistic approaches, the resulting density nevertheless allows for ample space. Radiating the logic of a well-constructed performance transferred to a superior album, the progression of Superette through eight originals and three covers (including tunes from Link Wray and the late Skip Spence of Moby Grape), concludes on the wistful but majestic note of Neil Young's "Birds:" it's a fitting end to one sustained moment of collective inspiration. 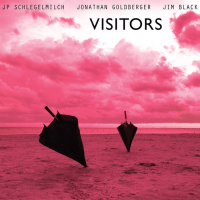 Perhaps because there is but a single guitar on Visitors-the versatile and ever resourceful guitarist and composer Jonathan Goldberger is the common denominator between the two records-the dissonance that ever-so-lightly leavens its companion piece is slightly more prevalent. Titular leader and keyboardist JP Schlegelmilch supplies most of it, albeit in the most understated fashion, conjuring atmosphere further enhanced by this stereo audio mix (even featuring some acoustic guitar on "Lake Oblivion II"). Crescendos like those opening the album on its titlesong evince more than just a hint of swing, while the synchrony of the band is just as evident during improvisational intervals. Over the course of eight tracks in the four-to-seven minute range, Visitors carries an impact both visceral and cerebral.

Tracks: Selector; She Walked In; Far Away Planet; While You Were Out; Djali; Calling On Cars; Ace Of Spades; Light Trails; All Come To Meet Her; Frozen Bread; Birds.