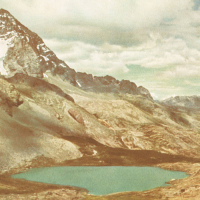 French musicians violinist Anouck Genthon and trombonist Mathias Forge first collaborated in 2015-16, brought together by a mutual penchant for both free improvisation and walking. Each is an experienced improviser; Genthon is a member of the Insub Meta Orchestra as well as other ensembles such as Ensemble Maât. Notice completed a hat-trick of duo releases for her, following Tǝɣǝrit (Confront, 2018) with Jacques Demierre's voice, and Zeitweise Leichter Schneefall (A New Wave of Jazz, 2019) with Christophe Schiller's spinet and voice. Forge has not released many recordings; prior to Notice, two on Another Timbre were most notable, including Pie 'n' Mash (Another Timbre, 2010) by his celebrated duo with Olivier Toulemonde.

Although a sleeve note says that "Notice" is a piece from different walking experiences, it was recorded at Insub. Studio, Geneva, on July 3rd 2018, and mixed by INSUB co-curator d'incise. Notice consists of one track with a running time of thirty-two-and-a-half minutes. Somewhat cryptically, after crediting Genthon and Forge with their usual instruments, the INSUB site carries the tag "and tape players & sine tones" credited to neither (or perhaps both, or maybe d'incise?). Without going into specific details of their methodology, the site also suggests the piece came out of the pair's walks together. The album's sleeve art of snowy mountain slopes leading down to a clear blue tarn is certainly compatible with this account.

The music itself supports the description. The first half does not play continuously but consists or a series of episodes separated by periods of silence. These sound as if they could be field recordings made during the course of a mountain walk, with added sound effects accounting for that "tape players" credit. Despite its episodic nature, this music is engaging and easy to listen to. At the track's midpoint, an unidentified male voice says "Stop" and there is a prolonged silence before the second half begins. It plays continuously and, with greater use of sine tones, is more coherent than the first. Throughout, the interactions between Genthon and Forge are impressive, as they each employ prolonged notes, making the combination of violin and trombone sound an obvious one.