Dan Fornero: Not So Old School 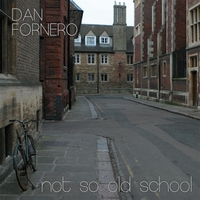 Fornax—now there's a word you probably haven't heard since sophomore Latin class—if ever. It translates as "oven"— words such as "furnace," al forno and—use your imagination for another example—are derivatives. Whether or not his surname emanates from ancient lingo, one thing is certain: trumpeter Dan Fornero's Not So Old School is indeed both contemporary and burnt-tongue delicious.

Well-known by way of his globe-trotting work with Phil Collins, the Brian Setzer Orchestra, Neil Diamond and present status as one of L.A.'s most in-demand session artists, Fornero takes the leader reins here and gathers some of L.A.'s premier "suspects" to offer 10 original selections steeped in the best high-energy funk, R+B, and pop-rock traditions. The up-tempo fare on this particular menu is so rhythmically intense it would make a "Mummy" shake its bandaged booty. And, the more restrained material is elegantly cognac- smooth.

It's obvious from the get-go that Fornero has a penchant for the driving pulses and biting staccato funk of the styles of Tower of Power, Prince, Earth, Wind & Fire, Al Jarreau and—rest his Godfather Soul—James Brown ("Gonna Be Fine" "Cunning & Baffling," "DataBass"). With a premier rhythm section that cuts loose below the screaming horns and the soul- oozing vocals, this contemporized effort is as good—or perhaps even better—than some of the aforementioned.

Eschewing the need for extensive spotlighting on his stellar playing ("Wish You Were Here"), Fornero has shrewdly allowed the ensemble to collectively shine. His original and co-authored tunes certainly demonstrate his talent, expertise and devotion to the genres. The vocal selections throughout are superb ("My Only Girl," "Don't You Know" "These Are the Words") but, make no mistake: what delivers the KO here is the utterly incredible cohesion of the horn sections forged with what percolates below (Hey Thanks). Overall and throughout, the guitarists and rhythm section rock this casbah.

Not So Old School is an impeccable performance that is supreme fun and—not for one 16th note—studio sterile. At this cooking school, the recipes are 5-Star and the use of asbestos gloves is highly recommended.

Gonna Be Fine; Cunning & Baffling; My Only Girl; Hey Thanks; These Are the Words; DataBass; Don’t You Know; Wish You Were Here.