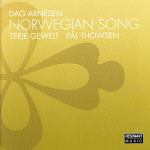 With the upsurge of jazz artists from around the world comes the realization that, with a melting-pot aesthetic defining jazz across the broadest possible spectrum, source material is expanding far beyond the traditional confines of blues, jazz standards and The Great American Songbook. It may be increasingly difficult to define what jazz is, but the litmus test of authenticity can almost always be felt on an instinctive level. Norwegian pianist Dag Arnesen's source may be his culture's traditional songs, but there's no question that Norwegian Song is a jazz record, by any definition.

Like fellow Norwegian bassist Arild Andersen, whose own extrapolation of the music of Norway into a more improvised setting on Sagn (ECM, 1991) strayed far from many of the stylistic markers that, for some, define jazz, Arnesen's trio takes its fair share of risks. But it's still as mainstream a jazz recording as anything released by artists like Brad Mehldau and Keith Jarrett (in Standards Trio mode). Unlike their overt virtuosity, however, Arnesen shares more in common with the spare economy of another Norwegian pianist, Tord Gustavsen, who thus far has made a career out of exploring the nooks and crannies of what only appears, on the surface, to be a limited musical space on albums including Being There (ECM, 2007).

Arnesen and his trio—bassist Terje Gewelt and drummer Pal Thowsen—don't exactly rip it up on this collection of eleven traditional Norwegian folk songs and music by composer Edvard Grieg. They do swing harder than expected on "Eg ser deg utr gluggjin (I See Your Shadow Yonder)" though—a modal tune that, in its innocent melody, suggests how John Coltrane's classic quartet from the 1960s might have sounded with more space and less of the legendary saxophonist's "sheets of sound." The beauty of Grieg's "Ved Rondane (By the Rondane Mountains)" remains intact as Arnesen's trio transforms it into a graceful ballad, focusing on the unadorned elegance of a simple melody and its all-important essence, even when it's time to for greater exploration.

Driven by Thowsen's hand percussion and featuring a warm solo from Gewelt—whose ability to make the right choices in a modest context echoes Charlie Haden's similar ability to draw deeper meaning out of deceptively simple phrases—Arnesen builds a solo profound in its harmonic richness while never drawing undue attention to itself. The song's the thing, and Arnesen, Gewelt and Thowsen are always in service of it, even on the Latinesque "Margit Hjukse," one of the most up-tempo tunes on Norwegian Song that, despite its short duration, gives everyone including Thowsen a brief chance to stretch more vociferously.

Speaking with the deep language and rhythmic diversity of jazz Arnesen proves, with Norwegian Song, that it is truly possible to find valuable source material in any corner. A jazz album by any definition, it possesses a warmth that will render moot any belief that Norwegian jazz is inherently defined by icy cool and barren landscapes.