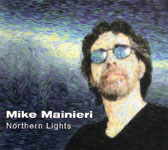 Vibraphonist Mike Mainieri has never garnered the same attention as Gary Burton, five years his junior, despite being equally cutting edge. Mainieri was one of fusion's early progenitors: Journey Through an Electric Tube (Solid State, 1968) and White Elephant (Solid State, 1969) explored new ways to incorporate a rock aesthetic with jazz. But while Burton has settled into a more mainstream comfort zone in recent years, Mainieri continues to test new waters. Northern Lights teams him with the "Norwegian Posse"—a veritable who's who of the contemporary Norwegian scene. The result blends the groove and ambience of nu jazz with a somewhat more emphatic approach to soloing.

Northern Lights features four-fifths of trumpeter Nils Petter Molvaer's group—including Molvaer, guitar soundscapist Eyvind Aarset, live sampler/beat programmer Jan Bang and turntablist DJ Strangefruit—so it's no surprise that the disc leans heavily toward atmosphere and a generally more selfless approach emphasizing the collective rather than any individual. Drummer Anders Engen (a regular collaborator with the also-present keyboardist Bugge Wesseltoft) and Swedish bassist Lars Danielsson form a rhythm section that's more straightforward than typically found in nu jazz. Still, while the program includes a trio of standards alongside Mainieri's compositions and a Bjork song, the treatments are anything but conventional.

"Nature Boy," which opens the disc with a gentle reggae groove, is a strong feature for both Molvaer and Mainieri's lyrical, less-is-more approach. Miles Davis' "Flamenco Sketches" is propelled by a gentle backbeat, while John Coltrane's "Naima" is given an Afro-centric reading, thanks to Paolo Vinacchia's hand drums and Mainieri's marimba. The vibe is cool, but not the Nordic cool that's more a stereotypical misconception these days. Relaxed in approach, Mainieri is surrounded by a group of musicians whose command of electronics and processing is so well-integrated that it feels completely organic and, in the case of those playing "conventional" instruments, a thoroughly natural extension.

Mainieri's writing ranges from the techno-centric "Poochie Pie" to the Latin-esque "Vertigo" and the snaky groove of "Dance of Ran." "Bang" is dancefloor-ready; saxophonist Bendik Hofseth's solo sound like a funky and energetic extension of Jan Garbarek's earlier years. One could imagine Mainieri playing the balladic "Remembrance" with his Steps Ahead group, but here the added string quartet and atmospherics provided by Bang, Strangefruit and Aarset take it to a more ethereal place.

While the cross-pollination of artists from around the world is becoming more common, too few recorded documents exist. The ever-adaptable Mainieri fits perfectly within the sphere of nu jazz's equally malleable improvisational take on electronica. Hopefully Northern Lights will bring well-deserved North American attention to the "Norwegian Posse"—and, by extension, the entire vibrant and forward-thinking Scandinavian scene.