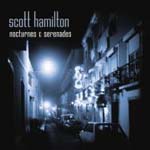 Scott Hamilton doesn't fix a thing here, but then when nothing's broke, there's no need to make such an effort, especially when what he does instead is prove that he has spent decades becoming himself. There are here no more than residual echoes of all the tenor sax players who've mined this fertile musical seam in the past, and the results are nothing short of uplifting.

In the press release that accompanies this disc, Hamilton refers to the fact that he didn't take the music school route in learning his craft, and the odd thing is that the older he gets, the more this becomes apparent. It's as if he's arrived at his own conclusions on the likes of "Autumn Nocturne" at the same time as he's cognisant with Lester Young's assertion regarding the importance of knowing a lyric if one is playing any particular song.

The passing decades have also had the heartening effect of deepening his musicianship, and on something like "Isn't It A Pity," this manifests itself in a depth of lyricism and a quality of reflection that's welcome in our increasingly fractious world.

As a half-time resident of London, it's not surprising that he's gone and got himself a superlative British rhythm section here, and the fact that the whole programme is taken at slow to medium tempo has the effect of emphasizing the group's skill at subtlety and nuance. While Hamilton is nearly always front and centre, Bassist Dave Green's outing on "By The River Sainte Marie" sticks in the mind, as does John Pearce's piano work on "Serenade In Blue." Drummer Steve Brown pushes when that's needed, but his contributions throughout ensure that the music burns with the bluest flame.

The idea that certain strands of jazz are timeless will perhaps always be a contentious one. This doesn't alter the fact that this is timeless music that's anything but emaciated when it's put across as it is here. Hamilton, Pearce, Green and Brown offer us a work of art, as opposed to the merely clinical strivings of the technically accomplished.

Man With A Horn; Autumn Nocturne; Flamingo; I