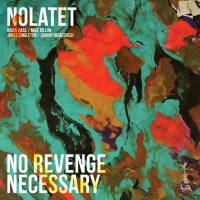 The music of Nolatet's sophomore album No Revenge Necessary belies its laissez faire title. Almost a mirror image of its largely insinuating predecessor, Dogs (Royal Potato Family, 2016), this sophomore effort finds the Crescent city-based ensemble flexing its collective muscles early and often, so the record lends itself to uninhibited dance almost as often as contemplation of its intricate musicianship.

But it's a circuitous route the band takes to the comparatively upbeat likes of "Pecos Wilderness." Prior to that number, the quartet initiates the proceedings via "Lanky Stanky Maestro" and with each instrumentalist taking a round, Nolatet has arranged the opener to feature a hint of the chops each member commands. The composition would also be suitable for the finale of a live set, but here functions as departure point for the more knotty interplay like that which occurs on "Homer and Debbie," where the warmth of Mike Dillon's vibes cushions Brian Haas' ringing piano figures.

The keyboardist's composition allows for more percussive interactions all around, but especially prominent is James Singleton's basswork. The long-time New Orleans resident is always assertive, so he doesn't really need to step up at such intervals, but his bandmates, including decades-old rhythm section partner Johnny Vidacovich, gracefully drop back to give him his due, literally and figuratively. The latter is equally unobtrusive as a drummer, yet his unpredictable style of pacing invariably draws attention, as on the slow, loping title tune. Lest this music come off too cerebral for its own good, the playful interval on "Elegant Miss J" creates an air of whimsy centered on Singleton's bowing of his upright bass, a doubly effective ploy as it in turn renders logical the distortion at the outset of the ensuing track "Dikefinger."

It's emblematic of the bond between these four musicians that their respective personalities are as evident in their original compositions as in their complementary playing styles. As a result, No Revenge Necessary flows smoothly from track to track, each cut like "Bluebelly" distinctive in and of itself, while still nurturing the almost imperceptible momentum growing as the ten tracks progress. Each member of Nolatet listens attentively to the others, in so doing enhancing a collective proclivity to anticipate their partners' movements. That natural attribute also allows for insertion of varied textures including pocket trumpet and tabla.

And that kind of contrast, in turn, only further solidifies the continuity within this record and, by extension, with its predecessor. By the time "Malabar" concludes this album on a somewhat ruminative note, listening to No Revenge Necessary has become altogether like hearing a single piece of music, improvised in an extended moment, by four men uncannily in tune with each other, the sum total of which is as abstract, yet inviting, as the colorful cover graphics.