Toph-E & The Pussycats: No Ordinary Day

By WOODROW WILKINS
November 27, 2010
Sign in to view read count 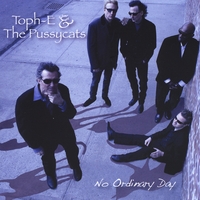 Toph-E & The Pussycats is a contemporary band with old-school ideas. Its repertoire combines jazz, funk and R&B properties. For No Ordinary Day, those elements are augmented by hints of Brazilian and Latin rhythms.

Part of the group's name comes from a variation of drummer Christopher Parker's nickname, "Toph." Collectively, the group's members bring a wealth of experience, including television credits and musical associations with a number of rock, pop, and jazz artists.

Will Lee and David Mann composed "Pussyfoot," with a groove that sets the tone for the remainder of the set. Mann leads on tenor sax, with Lee serving a cool bass line. Clifford Carter contributes a smooth keyboard solo, while Parker and percussionist Ralph MacDonald maintain a steady rhythm throughout.

Mann also wrote "It Seems to Me," which, at first, seems like an easygoing walk in the park. After a downshifted interlude, Carter solos on piano. Softly underscored by bass and drums, he stretches out, subtly at first but gradually building up. Mann comes in, shifting into high gear at one point. After the song reverts to its laid-back melody, Mann cranks up the intensity during the closing sequence.

Often, a lyrical ballad seems out of place on an otherwise instrumental album, but "Of Everything I Know" is a rare exception. Adapted from "Daquilo Que Eu Sei," composed by Vitor Martins and Ivan Lins, this arrangement has English lyrics written by Lee, who also sings. Mann plays the soprano sax, and the soothing blend of instruments and voice give the feeling of a romantic escape to a Brazilian beach.

Another Lee-Mann composition is "BlackHouse," with a soulful groove highlighted by Carter's keyboard solo and emphatic ending. The song is a tribute to the promise of a progressive future, brought on by the 2008 election of Barack Obama as President of the United States.

Listening to Toph-E & The Pussycats, at times is like hearing Fourplay with a saxophone and percussion in place of a guitar. However, by not having a guitar, the group has more space for the other instruments, in addition to a more acoustic sound. A major difference, however, is that all but two songs on No Ordinary Day are longer than five minutes, with four tracks topping seven. The band clearly has no concerns about fitting into a radio-friendly format, which gives them the freedom to play on.