By Trevor MacLaren
February 7, 2003
Sign in to view read count

Although social change is no stranger to jazz or Simone, this record speaks volumes on social change among tracks such as Pete Seeger's 'Turn! Turn ! Turn!' and Bob Dylan's 'The Times They Are-a-Changing.' 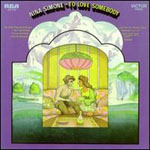 Nina Simone
To Love Somebody
RCA
1969

In the changing ways and times that were the late sixties, jazz was about to grasp some very revolutionary changes itself. Readers are likely to recall the work that was about to become the legendary genre of fusion. Although fusion was all about to happen, a record by one of the jazz's most overlooked innovators was already out, To Love Somebody by pianist/vocalist Nina Simone. The recording featured experimental cross-over arrangements of songs by folkies such as Bob Dylan and Leonard Cohen, as well as pop gurus the Beatles and the Bee-Gees. It represents one of jazz's first forays into the world of rock/pop music and one it's finest. Even though Eunice may have wanted to be the first African-American female classical pianist, jazz and the pseudonym Nina Simone brought her fame. Simone's fun experimentation with this role has given some brilliant moments in jazz's history, and To Love Somebody is truly one her finest releases outside traditional jazz.

Upon starting the record and hearing her upbeat arrangement of Cohen's "Suzanne" with gospel influenced vocals, listeners may find themselves enthralled or scared. But hidden in that track is a certain prevailing comfort from Simone that welcomes adventure. Once the listener is drawn in, it's hard to avoid being caught up in the record. Even her Chicago blues take on the Beatles' "Revolution" will surprise the most ardent anti-pop fan. The song sounds fresh and original in Simone's version, while staying true to the original. Pop may be the flavor, but it sure isn't the taste. Nina's piano remains deeply rooted in her classical and jazz roots. For example, when she works over Dylan's classic "I Shall Be Released," not only does she make it her own, but she turns it into the finest cover of this track ever. Dylan gave the song to the Band to record on their debut Songs From Big Pink, and it stands as one of the finest things Dylan ever wrote on social, cultural and spiritual imprisonment. But the real meat of the disc lies in her reworking of the Bee-Gee's "To Love Somebody" and the lesser-known "I Can't See Nobody."

Simone transmutates the tone into a beautiful spiritual, while evoking the pop sensibilities and groove of the original tunes. Although the brothers Gibb have been panned for their voyage in the world of disco, their tenure in the late sixties and early seventies proved them to be master pop song crafters. The dark tone of their version is given a light introspective treatment on this record. To Love Somebody proves, if nothing else, that Nina is a brilliant arranger, aside from her piano and vocal chops. With Simone's spiritual flare planted firmly in the Bee-Gee's tracks, it helps to center the ongoing theme of social and spiritual change throughout the record.

The ideology behind change makes this record stand out in her catalogue (even from the sequel Here Comes the Sun ). Although social change is no stranger to jazz or Simone (just listen to "Mississippi Goddamn"), this record speaks volumes on social change among tracks such as Pete Seeger's "Turn! Turn ! Turn!" and Bob Dylan's "The Times They Are-a-Changing." The counter idea related to this record is that the music contained inside foreshadows jazz's evolving style. Not only did Simone speak of the revolution of change in society, she played for the revolution of music.

In many ways To Love Somebody signaled a change in the jazz. As fusion and smooth jazz slowly brought the music into a more commercial light, Nina Simone was working on some equally overlooked work in the popular arena. Although it may not have been as life-altering as Bitches Brew or Mr. Magic , Simone definitely caught the spirit of jazz's future.