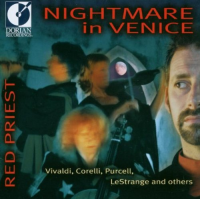 Classical Music With A Sense Of Humor, Part II

Priest on the Run was the Baroque quartet Red Priest's first recording for Dorian, released in the late 1990s. It was a thematic affair based on Antonio Vivaldi's flight from Venice at the time the composer was going abroad, assembled from the pens of the finest composers of the Baroque era. For the present compilation, Red Priest turns its attention to the spooky, the frightening, the downright scary. Nightmare in Venice is a deliciously Baroque Halloween-fest if there ever was one. Replete with hissing and catcalls, this disc is a chiller.

Image is not everything, though Red Priest has that quality in spades. This is a quartet of the best Baroque specialists the United Kingdom has to offer. Although Red Priest was praised by Gramophone Magazine, the group also received criticism for basically not being serious. That seems to be precisely the point. Classical music has ceased being fun (presuming that it ever was fun to begin with). What Red Priest has done is to market itself brilliantly to the young and educated crowd able to recognize not only their musical brilliance, but their promotional brilliance as well. Nightmare in Venice is splendid for no other reason than it brings together the more gothic compositions of all of the greatest composers of an artistic and philosophic era. Much of the music presented here looks forward towards Romanticism, skipping classicism altogether.

After hearing Priest on the Run, I thought to myself, "I hope these guys never record The Four Seasons one more time." But times has passed, and at this point I cannot wait to hear their Seasons. I suspect it will be a greater kick in the pants than Il Giardino Armonico (Electra/Asylum 1998). Red Priest is currently on tour delivering the Seasons in a way only they can—with grace, panache, and cojones this BIG.