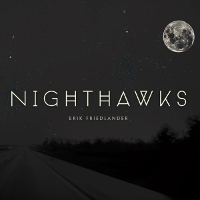 Named after the famous Edward Hopper painting, which depicts four people in a diner late in the evening, Nighthawks was conceived by cellist Erik Friedlander under similarly evocative circumstances—during the nearly week-long blackout that enveloped much of New York City in the aftermath of Hurricane Sandy in September of 2012. Inspired by the uncanny quiet and solitude, Friedlander set to work crafting a series of new compositions for his roots music-based Bonebridge quartet with slide guitarist Doug Wamble, bassist Trevor Dunn and drummer Michael Sarin.

Despite being conceived during a power outage less than a year after his wife succumbed to breast cancer, many of the tunes convey a sense of hopeful optimism—uplifting Americana tempered with a subtle edge of world-weary wisdom. The upbeat opener, "Sneaky Pete," juxtaposes bucolic Appalachian accents with Southern rock inflected-twang, courtesy of steely fretwork from Wamble, whose distorted tone adds gritty texture to the bluesy noir grind of "26 Gasoline Stations," complementing the leader's wiry pizzicato solo.

Friedlander and Wamble's palpable fondness for vernacular forms like bluegrass, country and folk elevates the session, telegraphing into more exotic fare like the Eastern-tinged "Carom," which features flinty interactions with the rhythm section. But for all the virtuosity on display, it's Friedlander's melodic writing that stands out, especially on ballads, like the lyrical "Hopper's Blue House," with its lush, arpeggiated counterpoint, or the hymn-like "Nostalgia Blindside," one of the most heartbreaking themes Friedlander has ever penned. On the latter piece, Wamble's sustained chords and Friedlander's sonorous arco seamlessly merge as one, deftly underscored by Dunn and Sarin's sensitive accompaniment.

This collection of appealing instrumental songs, with its engaging rhythms, gorgeous melodies and spirited interplay, resounds as a reassuring testament to the power of the human spirit to persevere and carry on, no matter the odds.