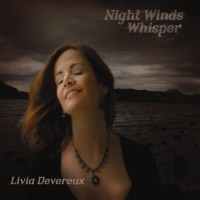 New York City vocalist Livia Devereux sings con brio. She packs a passel of this con brio into a brief set of eight songs with a total time less than 30 minutes. However, brevity is the soul of wit, and Devereux has no trouble rendering her music to the bare bone. The title, Night Winds Whisper, is derived from Patsy Cline's, "Walkin' After Midnight," setting the mood stage for this collection not-so- standard-standards.

"Walkin' After Midnight" has been covered by artists before—jazz and otherwise—including The Cowboy Junkies (1988), Madeleine Peyroux (1996), Jessica Molaski (2007), Katy Moffatt (2002) and Tierney Sutton (2002). Devereux's version is closest to Sutton's. Both singers take the country classic on as a jazz torch, removing the walkin' rhythm and replacing it with a swing that is smooth and sophisticated. The presence of pianist Sarah Jane Cion's rhythmic sense also increases the density of this sophistication. Ole Mathisen rips a fast tenor solo, taking the country song fully into the jazz realm. Devereux shows that no matter where a song originally comes from, if it is well written, it will transcend genre.