Home » Jazz Articles » Svetlana and the Delancey Five: Night at the Speakeasy

Svetlana and the Delancey Five: Night at the Speakeasy 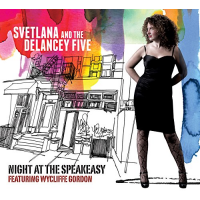 The name Svetlana and the Delancey Five sounds like a Cold War cadre of marauding spies. Moscow-native Svetlana Shmulyian is the real article and brings a certain "other-worldness" to a jazz repertoire existing somewhere between 1920 and the Rapture. The band's Night at the Speakeasy is their debut for the West Coast OA2 Record label. With that title, it is just too easy to assume that this recording is simply an expose of the older forms of jazz typically committed to the Arbors Jazz or Nagel-Heyer labels. While there is plenty of the old stuff that could have been heard in a Prohibition speakeasy, Shmulyian do have some surprises up their sleeves.

Making concrete their commitment to an earlier "Hot" jazz is the presence of special guest trombonist/vocalist Wycliffe Gordon, who lends his Louis Armstrong voice to "You Won't Be Satisfied" and "Under a Blanket of Blue." As suet partners, Shmulyian and Gordon are well paired, sharing a potent synergy with the band, transforming these old songs into something new and fun. Trumpeter Charlie Caranicas is well-studied in the brass traditions of the period, with pianist Dalton Ridenhour readily providing the connection between the Youmans/Caesar "Tea for Two" and the Beatles' "Because."

Shmulyian prove quite the composer, swinging in the opening "All I Want" and bright and well-scrubbed "Temptations." Shmulyian's voice has good balance and just enough accent to melt the ice cubes in the listeners' scotch and soda. Her most inspired singing is on the Beach Boy's "God Only Knows," which transforms oddly well into a jazz chestnut. Bringing that off alone endorses a listen to the rest of the disc.

All I Want; Just A Sittin’ and a Rockin’; You Won’t be Satisfied; It’s All Good (Big Noise); Do Nothing Till You Hear From Me; Under a Blanket of Blue; Temptations; God Only Knows; Lady Be Good; Because; Dance In Between the Moments; You are Like a Song; Sometimes I’m Happy; Tea for Two.

About Svetlana and the Delancey Five