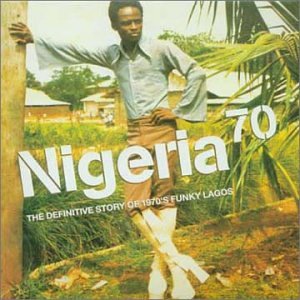 Lest we neglect the under-represented sounds of West African funk, the folks at AfroStrut have put together a magnificent 3-disc compilation that celebrates the movement. Nigeria 70 reminds us of the spirit and diversity of the sounds that emerged around Lagos in the '70s with nearly 150 minutes of music. At the outset, let's make it clear where this set stands: at the very pinnacle of African music compilations ever released. The subject certainly offers a rich field to mine, and the producers have done an amazing job bringing the music to life.

First, a bit of history. At a vortex of influences from West Africa, East Africa, the Caribbean, North America, and its own rich traditions, Nigeria emerged as a potent musical force in the mid-20th century. The rich drumming traditions of Ghana and the New World African diaspora filtered through to Nigeria in the early '50s through highlife (introduced by E.T. Mensah, who on one occasion performed upon request with Louis Armstrong). Highlife fused the rhythms and styles of calypso, Cuban and Antillean music, and other traditions with Ghanaian drumming. Highlife was (and is) a music of social commentary, creative instrumentation, and an unshakable groove. As this music grew in popularity, it diversified into forms that increasingly included jazz elements, guitars, big bands, and emphatic vocals. Together with palmwine (urban folk music), juju (popular dance music), and fuji (which emphasizes lyrical content), highlife grew into a towering presence. Prince Nico Mbarga made "Sweet Mother" the best-selling record in African history (15 million sold, as well as an untold number of bootlegs). When the '70s hit, the time was ripe for funk to enter the scene.

The two biggest stars of Nigerian music, King Sunny Ade and Fela Kuti, had a huge impact on the entire continent. Both are represented here: King Sunny with a freewheeling band of 20+ musicians, and Fela with three different groups from '64, '71, and '76. It's hard to include enough Fela Kuti on a '70s Nigerian retrospective. (The title of the set comes from the name of a band Fela led.) Fela's talent lay in his pointed lyrics, his loose improvisational style, and an unswaying rhythmic energy. He gets down and dirty on the set's best track, "Jeun Ko Ku" (Chop 'n' Quench), which begs more than one shake of the booty.

But the producers also included a number of other musicians both well-known and more obscure. Blo, a band formed from the ashes of Ginger Baker's Salt outfit, occupies a niche heavily influenced by American psychedelic rock (no surprise there). Bongos Ikwue adopts the spirit of American blues and takes this approach to the extreme with "Woman Made The Devil" (suffice to say that the title summarizes his simple point, with no apologies). Orlando Julius builds chant-like vocals over oscillating rhythms on ""Alo Mi Alo," punctuated with instrumental solos and supported by heavy-duty drum underpinnings. Ofo The Black Company hits right at the intersection between psych rock and funk with their anthem "Allah Wakbarr." And Gasper Lawal goes right for the hip with a big band disco/funk treatment of "Kita Kita."

In addition to two discs of music, Nigeria70 also includes a third CD with a five-part documentary. If you want to understand how all the influences of Nigerian funk came together, this disc provides essential material. Rather than assuming a position of didactic intellectualism, it intertwines historical information with a variety of musical samples and testimonials. Also, the liner notes (16 densely packed pages) offer a heap of general background as well as detailed information on each performer.

This 3-CD set is a model for how compilations should be put together. It's required listening for anyone curious about the intersection between funk and West African music. Unfortunately, American distributors have backed off on this British production, and it is only readily obtainable overseas (eg. from Amazon UK). Let's hope the higher powers reconsider this unfortunate decision. This music deserves a wide audience.

Visit AfroStrut on the web.