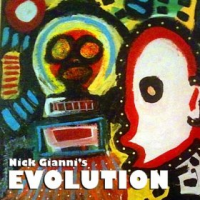 Saxophonist Nick Gianni's Evolution is a latter day fusion band, forged in the fires of New York's downtown scene. Nublu—an off-the-beaten-path club in Alphabet City—served as the incubator for this group, as it blends funk, electronica, free jazz and worldly influences to come up with a style all its own.

The music on its self-titled CD is built around the steady pillars of drummer Dalius Naujokaitis and bassist Dmitry Ishenko, who provide an ever-funky bottom, upon which the rest of the band can build. They deliver hiccupping grooves ("Dharma Clouds") and semi-static backdrops that hold everything in place, but they don't simply dispense the same patterns ad infinitum. They allow the contextual shifts of the music to be their guide as they consistently communicate and make small adjustments.

Gianni's potent horn work provides most of the thrills here. He balances melodicism with outré frenzied abandon ("Crap Shot") and comes across like a '60s firebrand who also enjoys the work of Morphine's Dana Colley ("Tritone County"). He's occasionally content to just meld with Rick Bottari's shimmering keys, but he sounds best when making a ruckus all by himself.

The first five tracks on this short album are all cut from similar cloth, but the closing "Gone Gone Completely Gone" is a stylistic departure built on a faux-Asian foundation. Koto-like sounds introduce the tune and the band slowly paints over a stark and empty canvas. Sounds are slowly layered until all parties involved are adding to the song's loose and exotic backdrop. While the inclusion of this number at the end of the album may seem a bit odd, considering the steady and largely unchanging diet that comes before, it proves to be a wise choice that demonstrates this isn't a one-dimensional outfit.

Nick Gianni's Evolution isn't likely to start a revolution with its music, but the group has developed its own engaging sound, put it out there with passion and purpose; two things that are sorely lacking in many an album today.