By PHIL DIPIETRO
February 1, 2002
Sign in to view read count 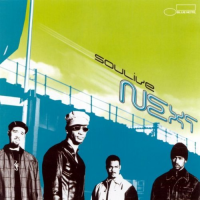 Honestly? I wasn’t intending on reviewing this one... ‘til I heard it! Sophomore slump my sweet a...uhh, Lord. You heard it here first, this recording is going to blow the roof offa Soulive, and the roof, the roof, the roof is already on fire!... catch my meanin’ now? These guys managed to sell truckloads of records last year without getting picked in the top whatever in any of the polls by the major jazz mags. And they have had plenty of ink - all of it lustrous and shiny. Granted, not so much of it has appeared in the so-called “jazz press” but certainly everywhere else that the music crosses over, especially in the burgeoning jamband world. They rightfully stand with MMW and Charlie Hunter as the genre’s best sellers, its most inexhaustible road warriors and now, its standard bearers.

Their success derives in due part from the attention and devotion of an ever increasing band of grass roots fans, not unlike the devotion lavished upon their most conspicuous guest on Next, one Mr. Dave Matthews. Like Matthews, they give back to the fans by gigging incessantly, and encouraging and abetting the high quality recording and hi-tech distribution of their live dates and impossible-to-keep-track-of live side collaborations.

A few changes are about, most obvious among them the addition of former collaborator Sam Kininger of Boston funkmeisters the Squad as a full time member of the band. He’s not only full time, but full on, as he is featured throughout as a soloist, co-melodist and one man Horny Horns-like “section”. If you want to play the influences game - think Benny Maupin , Eddie Harris and Sonny Criss- but Sam always sounds like Sam (even on the archetype of “Soulive’s Studious Stealth Stolen Seventies Soul Segues” that appears at the end of “Flurries”- check it and smile with me now). Another important element is that it appears Neal Evans has “had it” with playing organ bass, at least with the left hand on the Hammond B-3. “ How dare he? ” , asks the legion of B-3 purists. Well, many of the badass and organ-thick bass lines on Next are evidently achieved via a Roland sound module. Sorry, allegiant ones, but it sounds better on the record. Quite simply, the bass lines are clearer, and on the jazzier tunes, the sound certainly mimics that of the B-3, but it’s somehow sonically lower , “bigger” and more subwoofer friendly. If anything, the presence of the bass lines guarantees Neal Evans’ left hand a place on the Downbeat Readers poll next year for “best electric bassist”!

Now please note, this record is not about a successful band trying to figure out their next move, but from a band evolving almost to the point of mutation, yet remaining of the same strain. I was really expecting more of the same, and to an extent it is, but this goes well beyond an extension of Wes with Jimmy and Grant with Big John underlain by hip hop drumbeats. This modern extension of the Blue Note history has hybridized with the ultramodern nascent R&B of the D’Angelo, the Roots, Erkyah, Jill Scott variety. This happens to varying degrees with different tunes, but right now I’ll expand on the middle of the record.

Speaking of the Roots, their Black Thought is on hand for the band’s first absolutely straight- up hip hop collaboration, “Clap!” Recently, drummer ?uestlove of the Roots proclaimed, after their amazing “MTV unplugged” performance with Jay­Z, that in terms of live Hip-Hop backing bands, “I don’t want to say we’re the only game in town , but...we’re the only game in town.” Yo, ?uess who’s the other game, as of this joint. I imagine some well-known members of the hip hop community will be bustin’ down the door over at Velour Music, the band’s management company, to get the boyz ta represent in 2002.

After a classic Soulive vamp, complete with background turntable-like washes from Neal, I’ll be dipped if they don’t do a modern hip hop groove again for eight minutes on “Nay Nay”, but turn it into a killing piece of soulful jazz, with Kininger’s horn section providing punctuation to the solo takes (Sam gets one plus the fade). Make sure to dig Kraz diggin’ into the Strat for the octave-divided funk, and Neal’s chord work with the right hand. This changes up for the downtempo, stripped-down, sultry, romantic, bohemian balladry of “I Don’t Know” featuring another Roots collaborator, Amel Larrieux. Note to aspiring funk guitarists: Please emulate Kraz’s judicious use of the wah and whammy for the vocal/vocorder-like solo spot here.

The whole batch of tunes is soulful and jazzy alright, but different from that last batch of soul- jazz. The press materials provide the informational nugget that might define why the record seems like such an emboldened step. All of the tunes on Next were written specifically for the studio, and none were performed live until after they had been recorded. No wonder they seem so fresh.

No doubt, the most interesting collaboration on Next, and the one most likely to drive sales through the roof, especially in terms of jazz numbers, is that with Dave Matthews. The band took to the road with the DMB on their US tour last year, and Matthews quickly took to introducing them each night as "the greatest band in the world". Seems as though he was suitably impressed. To cap it off, the collaboration is really a three way with the wonderfully formidable Ms. Ani DiFranco. Yes, the tune they cover is none other than her “Joyful Girl”, accomplishing said feat in a manner in which fans of Matthews and Soulive may imagine, yet putting a unique spin on it while proving, indeed, as Neal Evans says, they can “.... paint with all the colors."

Soulive cannot be denied. God knows I’ve tried. Sometimes it’s hard seeing bands achieve such a level of success in terms of touring power and record sales in a genre so full of talent yet so starved of market share. Y’know what? I officially give up. These guys have earned it! I’ve seen Krasno with Lettuce , Kininger with Fatbag, Al Evans with Denson’s Tiny Universe and early Soulive at a free outdoor gig in Boston where less than 20 people opted to catch their vibe. They’ve built on their audience and their sound gig by gig to get where they are. We can only hope that they become one of a handful of artists that drag a few of their lesser known, but equally deserving contemporaries, and maybe the lately-fading fate of an entire genre, along with them.