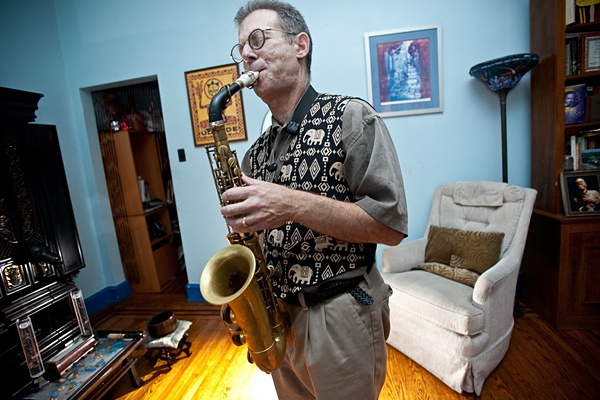 slideshow
Cecil Taylor and John Coltrane inspired saxophonist and composer Bobby Zankel is usually heard with his Warriors of the Wonderful Sound big band performing large-scale compositions such as his recent re-setting of Coltrane’s A Love Supreme.

Here, on the occasion of a celebration of mural art, which has turned numerous outside walls of Philadelphia buildings into high art, Zankel was inspired to produce a more compact piece for six instrumentalists and singer. The stimulus for the composition was a wall mural created by Josh Sarantitis and Parris Stancell entitled “Peace is a Haiku Song,” which includes quotable quotes on peace by famous African Americans such as Sonia Sanchez, Toni Morrison, Alice Walker, and Martin Luther King.

Zankel set some of the sayings on the mural to high intensity jazz which echoed much of what one hears with the Warriors. Haiku is a short form of poetry originating in Japan, and Zankel used short but powerful and paradoxical statements like “Peace is not the absence of tension; it is the presence of justice” to develop concise musical embodiments of the ideas expressed in the mural. The combination of visual arts with music, emerging from the cinema and digital technology, is cropping up frequently these days, and Zankel has previously composed music based on the art work of visual artist John Dowell. In this case, several composers and musical groups were asked to respond creatively to this specific mural, transforming art into music in a way that resembles “synesthesia,” where some people hear colors and see sounds! This project doesn’t go that far, but the composers must certainly have “heard” some of what they “saw” on the canvas.

Zankel’s group consisted of vocalist Ruth Naomi Floyd, trumpeter Josh Lawrence, violinist Diane Monroe, pianist Tom Lawton, bassist Lee Smith, and drummer Craig McIver. The piece moved from pulsating exhortations driven by Lawton’s pounding left hand, to Floyd’s recitative, through improvisations by each band member, swinging whole-band interludes, and a powerful finale. Zankel is proving himself to be one of the finest contemporary composers, with a consistently outstanding output that incorporates mythical and spiritual elements with an avant- garde stretching of the traditional jazz envelope.