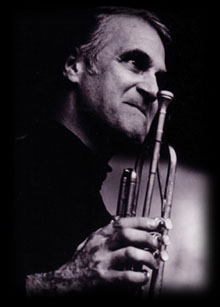 He settled into the studio scene in the 1950s after tenures with Herman, Tex Beneke, Jerry Gray and Stan Kenton, among others.

As a preeminent lead trumpeter, he played for the orchestras of Alex Stordahl, Gordon Jenkins, Nelson Riddle, Don Costa, Michel LeGrand and Henry Mancini, as well as Frank Sinatra.

He also played lead with the Shorty Rogers Big Band.

Candoli's association with top bands reads like a “Who's Who" of jazz. He was featured with Tommy Dorsey, Glenn Miller, Les Brown, Count Basie, Freddy Slack and Charlie Barnet.

He was born Walter Joseph Candoli in Mishawaka, Indiana on June 28, 1923, and was most recently a resident of Studio City, California.

Equally expert with classical music and pop, he conducted music seminars and concerts at some 30 universities and colleges when not playing a jazz festival, concert or nightclub somewhere.

Candoli composed and arranged music and conducted for Judy Garland, Ella Fitzgerald and Peggy Lee, among others. Having played first trumpet for Igor Stravinsky's “Ebony Concerto," written for the Woody Herman Orchestra, he received much acclaim for his versatility as a solo trumpeter.

He won awards as outstanding trumpet player from Downbeat and Metronome magazines, two of the most prestigious publications in the music business.

He also won the Esquire and Look magazine awards as one of the seven all-time outstanding jazz trumpet players (the other six were Louis Armstrong, Bix Beiderbecke, Harry James, Bunny Berigan, Dizzy Gillespie and Bobby Hackett).

“I'm radical! I never play the same jazz thing twice!", Candoli once asserted of hs technique. “I'm like a chameleon and I play what I feel, although I may favor some patterns. Also, I'm a little staccato, on edge of my fiery type of playing."

His three marriages ended in divorce.

Pete Candoli had two daughters: Tara, by Lane (who died in 1983), and Carolyn, by Hutton (who died last March of colon cancer). He is survived by Adams.

His brother Conte died of cancer in 2001.