SOURCE: ALL ABOUT JAZZ
November 13, 2007
Sign in to view read count 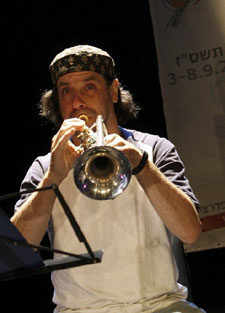 slideshow
Frank London is one of the most interesting and colorful figures in the current revival of Jewish music--mistakenly identified only as Klezmer music--of the last two decades. London seeks consciously and constantly to expand the terminology and vocabulary of Jewish music with groups including Hasidic New Wave, Shekinah Big Band and Klezmer Brass All-Stars. The Klezmatics won a 2006 best World Music Grammy Award for its versions of Woody Guthrie songs on Wonder Wheel (Jewish Music Group, 2006). “It was a very important milestone for Jewish music, acknowledging Jewish music in a very official way as part of the canon of World music," said London. But London is also known for injecting a healthy dose of free jazz aesthetic and energy while addressing current political agendas, controversial issues and speaking openly about his left-of-center politics.

AAJ's Israeli correspondent Eyal Hareuveni spoke with London while he was performing in Jerusalem. The interview sheds light, not just on London's lifelong interest in Jewish music, but in a broader context that sees it intersect with the music of other cultures.

Check out Frank London: The Jew with the Horn at AAJ today!