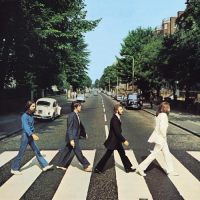 slideshow
Abbey Road was the last Beatles album on which all four members recorded together. By the time they gathered to work on their 11th studio album at the Abbey Road Studios between February and August 1969, they had done it all, seen it all and owned virtually everything they ever wanted. In fact, they had become so famous they were detached from the culture they helped start back in '64. Giving up touring in 1966 to become studio cobblers, the Beatles left an expansive vacuum in the marketplace that was quickly filled by artists such as Cream, the Doors, Jimi Hendrix, the Byrds, the Kinks, Pink Floyd and others.

Now, 50 years after Abbey Road's recording and release, Apple Corps Ltd./Capitol/UMe has issued a super-deluxe three-album edition featuring the original 17 tracks newly mixed by producer Giles Martin and mix engineer Sam Okell in stereo, high resolution stereo, 5.1 surround, and Dolby Atmos. There also are 23 session recordings and demos, most of which are previously unreleased. Also available are a three-LP box, a deluxe two-CD set, and a standard one-CD and one-LP edition. But do yourself a favor and buy the three-CD super-deluxe edition. The extras are well worth the extra cost.

In retrospect, the Abbey Road album is something of a CAT scan of the Beatles' ailing souls, with all of their weariness, frustration and boredom. Through the music, you sense they were fed up with each other, done with George Martin's heavy production, tired of studio cabin fever, and angry about missing out on the seismic shifts and rock festivals.

In all honesty, I was never a big fan of Abbey Road. When the album came out, my family had moved to the suburbs of New York that year, and most 13-year- olds I knew rarely put it on. Nor did I, probably because I felt the album was a low-energy, unfocused collection of singles and transitional music-hall montages housed on an album that lacked kick or cohesiveness.

Listening again today, the original tracks still fail to lift me. But the bonus material is another matter entirely. These 23 tracks make up a fascinating drone-like overview of a magnificent construction site. What's fascinating is that the album's songs actually sound better in their early roughed-up form than the glossy finished product. Which made me realize what I didn't like about the album in the first place. It was too polished and earnest. The coarseness of the bonus tracks along with the experimental intros (Maxwell's Hammer, Because), the pep (Come and Get It) and drill-downs (the string parts on take 39 of Something and take 17 of Golden Slumbers-Carry That Weight) exhibit little of the dreary melancholy of the album's processed master tracks.

Just months later in May 1970, the Beatles released their last studio album, Let It Be. Recorded before Abbey Road, the album was like something hurled from the window of a car. The Beatles had broken up a month earlier, and each member was off to do his own thing. The album was a farewell letter, a musical laundry list of excuses without an apology. From Two of Us to Get Back, the songs were a tour de force of simplicity. By then, life in the country had become much simpler than living in the city. I finally had my own room, there were lawns, woods, streams and pitch black and dead quiet at night. Let It Be made complete sense. A new chapter had begun, and Let It Be was my soundtrack. Abbey Road was history.

Revisiting Abbey Road through the bonus material forced me to reconsider the breadth and scope of the work. The original album still sounds disjointed, but at least I now understand the effort and magic that went into it.

Here's the studio demo of Something...

Here's the strings instrumental part to Something scored by George Martin...

And here's the newly mixed Something from the 50th anniversary album...